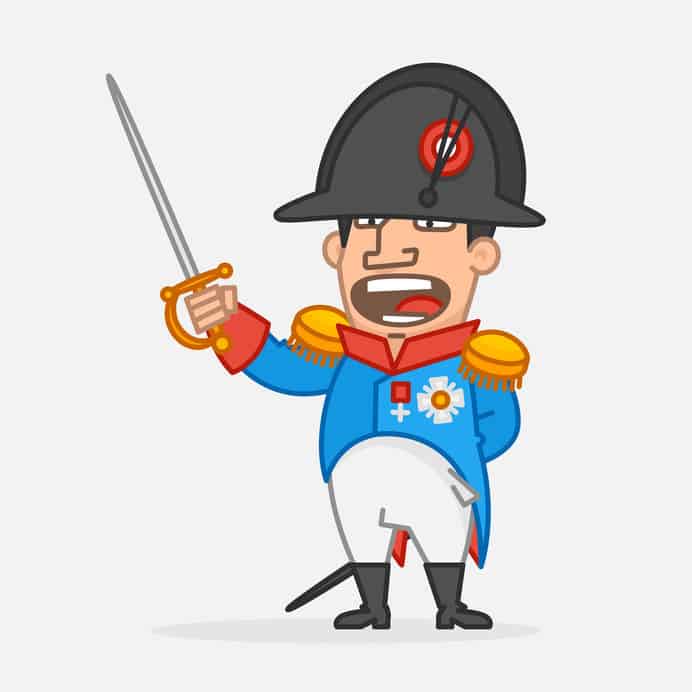 Chances are you’ve seen photos of Napoleon Bonaparte’s iconic hat. The hat is a quintessential aspect of French history.

Napoleon Bonaparte wore a bicorne hat featuring a red, white, and blue cockade. Napoleon and his hat are synonymous with each other and with the French Revolution. The Emperor made the two-cornered hat so famous it is now commonly referred to as the Napoleonic bicorne.

Napoleon Bonaparte was a significant military figure in the late 18th century French Revolution. He led the French army in their fight against the monarchy.

To many in France, he was an ambitious, persistent man of the people. To others, he was a nightmare.

His rise to the top resulted in Napoleon’s dictatorship. It didn’t last long, though, since his army was defeated in the early 19th century at Waterloo.

Napoleon was exiled to St Helena in the Atlantic, where he died six years later, in 1821.

What Is a Bicorne Hat?

Napoleon’s use of the bicorne hat is so famous today that it’s commonly known as the Napoleonic bicorne.

The word bicorne (also spelled bicorn) means “two-cornered” or “two-horned.” This term refers to the hat’s bottom corners’ sharp angles that make up a fan-like semi-circular brim. The crown of the Napoleonic bicorne juts out, giving it a rounded look joining together at the two pinched ends.

Most people who sport the bicorne hat style it “en Colonne” (“in column”), meaning the flat bottom edge sat parallel to the shoulders. Napoleon, however, flipped the accessory around and donned it “en Bataille” (“in battle”) and had it sitting parallel to his shoulders. If the hat itself wasn’t already distinct iconography of Napoleon, the way he wore it definitely was.

The famous hat is made up of silk and felt and is black. Historians say that Napoleon’s hatmaker delivered four bicorne hats to him every year. All were formed from a black beaver pelt and came complete with the French cockade fastened by a button.

Check out this popular Napoleon hat on Amazon.

Not only is Napoleon known for his relentless drive and devotion to France, but he’s also well-remembered for his infamous bicorne hat. The hat was adorned with a cockade colored in red, blue, and white.

Revolutionary French laypeople were the first to adopt this colorful hatpin. It became a symbol of the movement and their loyalty to the country. When Napoleon added this meaningful accessory to his hat, it affirmed his allegiance to the people.

Napoleon intentionally dressed in the style of the masses, despite his access to more luxurious attire. This aided the Emperor towards the goal of his troops seeing him as one of them. His hat was the one thing that distinguished him. Although the man was a formidable opponent, he was someone you wanted to have on your side.

For many troops and the general French population, Napoleon and his iconic hat were symbols of comfort, patriotism, and pride. The tri-colored cockade was worn by Napoleon and revolutionaries alike. It was the first instance of France’s current red, white, and blue flag we know today.

Bicorne hats were so integral to Napoleon’s look that he always had twelve of them with him. One was buried with him when he died, and others can be found on display at museums.

History of the Bicorne Hat

Functional purposes originally inspired the three-cornered hat. In battle, soldiers lifted the brims of their hats in a triangular shape to direct water off their faces when it was raining.

In the 17th and 18th centuries, this aristocratic-inspired hat became popular with the masses. As wigs were getting larger and gaining traction, the tricorne overtook the previously popular low-sitting hats. Wigs got the attention they deserved when a heavy, overbearing hat no longer shadowed them. Thus, the tricorne took over.

The bicorne was an adaptation of the tricorne and was, of course, made famous by Napoleon. However, it remained a staple of military attire even after Napoleon’s time.

Bicornes maintained steady popularity until the First World War and slowly began to fade out of circulation. Specific military regimes like the British, Japanese, French, and USA kept the legacy alive, but following World War II, it became nearly extinct.

The hat faded out of circulation for the general public around the early 19th century, with the top hat hitting its stride.

Where Is the Bicorne Hat Today?

If you want to pay homage to the French revolutionary for cosplay, as a Halloween costume, or just for fun, you can head over to Amazon and snag a Napoleon Costume Hat.

To go down in history and be recognized just from the hat you wore is impressive. The man was a relentless politician and leader who spearheaded many significant battles. His hat was a part of him, and he quite literally took it to the grave.