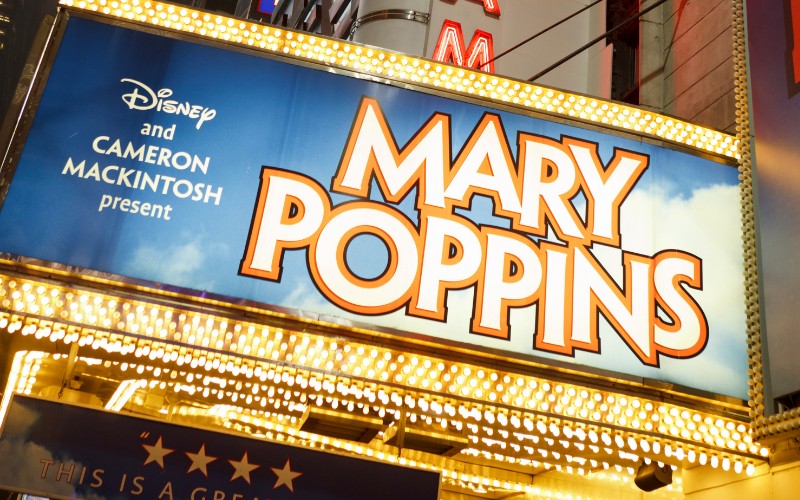 In the 1964 film Mary Poppins, the main character — Mary — wears a unique hat.

This lovable character also carries an umbrella and bottomless tote bag and wears a white blouse, bowtie, and a skirted suit to add to her elegant ensemble.

What Did Mary Poppins’ Costume Consist Of?

The most iconic piece of Mary Poppins’ costume is her unmissable brimmed boater hat paired with her umbrella.

Her elegant ensemble is at the core of Mary’s widely recognized costume. Her outfit is complete with a white blouse tied with a women’s bowtie and her skirted suit tied together with lace-up boots, perhaps inspired by the Victorian era.

Given her stylish ensemble, she finished off her look with a bottomless tote bag. The tote bag, of course, is featured in a scene where Mary continues pulling a seemingly endless number of items from her purse.

Though simple in composition, Mary’s costume leaves room for a pop of imagination and individuality.

Where Can You Buy a Brimmed Boater Hat?

Despite being less common than in the past, some stores and outlets still sell brimmed boater hats. Perhaps the most user-friendly and affordable online option is Amazon, which sells variations of the once-classic Mary Poppins hat, such as this Aylis Boater Sun Hat.

However, you can also use Amazon as a hat supplier for costuming. You might find a replica listed as “Mary Poppins Hat” or “Mary Poppins Costume Hat.” Price-wise, these hats range from a few dollars and soar into several hundred dollar territories.

The Disguise Women’s Mary Poppins Hat is a true-to-life Mary Poppins Hat, just like the movie. It’s comfortable, adorable, and covered in the same flowers the character wore throughout the story.

It’s relatively budget-friendly and one-size-fits-all, making it an excellent addition to your cosplay outfit or daily attire.

What Was the Plot of the Film Mary Poppins?

This 1964 film starring Julie Andrews features a star-studded cast. Alongside her fellow castmates, Andrews shares the story of an English family who welcomes a new nanny (Mary) into their home.

The film follows two young children’s journey as Mary teaches them the importance of play and imagination.

This film consists of colorful scenes, playful themes, and a playlist filled with iconic songs that children love. The entire family will love this film, as Mary Poppins is a heartwarming journey through the imagination.

Mary Poppins will always be a classic character, so why not get inspired by her traditional yet unique hat style?