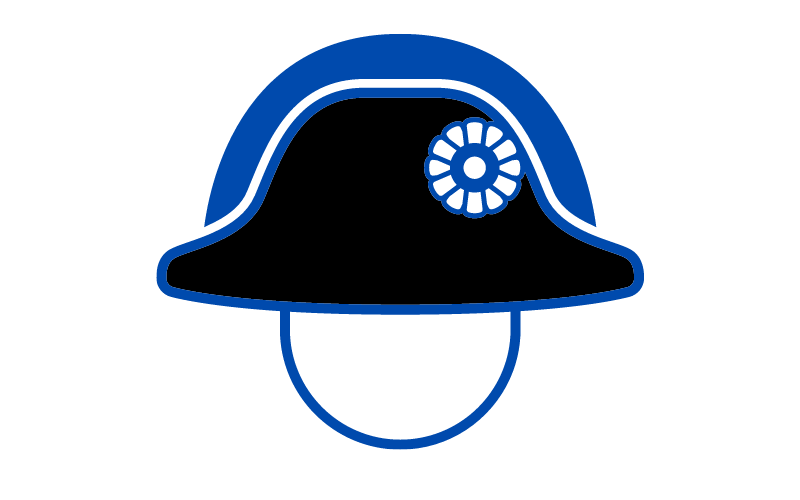 The bicorne hat, also called the chapeau bras, was popular throughout the 18th and 19th centuries as a dress hat that could be tucked under the arm comfortably.

Famous people who wore bicorne hats were generally military officers, especially those involved in European or American Navies. Additionally, leaders of exploratory expeditions from the United States and Europe were known to wear the bicorne hat.

Read on to learn more about seven famous people who wore the bicorne hat.

Napoleon’s beaver fur bicorne hat made him distinguishable in battle, mainly because he wore the hat sideways, not with the points facing front and back.

He wore the hat throughout his reign from 1804 to 1815. Bicorne hats were so integral to Napoleon’s look that he always had twelve of them with him.

Read more about Napoleon’s hat in this article.

Admiral Lord Horatio Nelson of the British Navy was known for his bicorne hat throughout his career in the late 18th century.

His career highs included defeating Napoleon in battle at the Battle of the Nile in 1798, winning a direct trade route to India, and saving the British from a French invasion at Cape Trafalgar. Ultimately, he was killed by a French sniper in 1805.

You can get your own Nelson hat on Amazon here.

Captain John Paul Jones was a captain of the United States Navy and was characterized as a pirate by the British. Jones first sailed as a cabin boy at age 12, then continued to pursue a career on vessels throughout his adult life.

In 1772, his crew became mutinous, and he killed their leader before fleeing the West Indies where they’d been stationed.

Jones was brought into the Continental Navy as a senior lieutenant in Philadelphia when the American Revolution began. He sailed on the Alfred and defeated the British ship the Glasgow in a battle in the Bahamas.

He and his crew explored and researched Antarctica for two years, from 1910 to 1912. He and his men died on their return journey after reaching the South Pole in 1912.

Scott’s wife was awarded the knighthood that would have been bestowed upon him had he survived.

Grand Admiral Alfred von Tirpitz was a German admiral key in the formation of the German Navy in the years before World War I. Early in his career, he attended the Kiel Naval School and was first commissioned for work in 1869.

Tirpitz led a German fleet in East Asia throughout the late 19th century, scouting and choosing the location of a new naval base in China.

Admiral George Dewey, a wearer of the bicorne hat, commanded the U.S. Navy’s Asiatic Squadron in Hong Kong in the late 19th century.

Meriwether Lewis is known to have worn a bicorne hat on his 1804-1806 expedition with William Clark to the American Pacific Northwest, in what became known as the Lewis and Clark Expedition.

The party traversed 8,000 miles (1.61 kilometers) of territory from the Ohio River to the Pacific Ocean, studying and collecting the plants, animals, and minerals they found along the way.

Lewis and Clark encountered many Native American leaders along the way, declaring sovereignty over them while inviting them to send delegates back to the East for representation in the new empire.

They distributed goods, delivered speeches, and claimed to come in peace.

The bicorne hat is seen in glimpses across history, usually on the heads of naval commanders and other military professionals. These famous bicorne-wearers likely valued the hat for the way they could tuck it under their arm without discomfort.