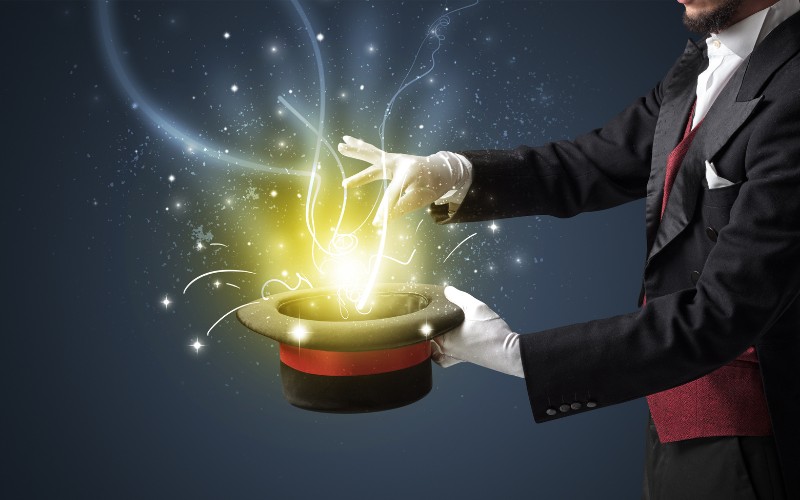 Top hats were a historic status symbol for the middle and upper classes during the Victorian Era. Today the Top Hat is still a popular accessory for formal occasions across the globe.

What many people would now associate with a Top Hat is a magician. This identifiable symbol, along with a wand and pack of cards, the Top Hat, has been worn by both historical and modern-day magicians to take their act to the next level.

Top Hats were made famous by performers as far back as 1814 when Louis Comte pulled a rabbit out of his top hat. This ‘hat-trick’ became more popular and saw not only rabbits but bunches of flowers and other items being mysteriously produced from inside the hat.

Get your party magic hat on Amazon.

Since then, illusions and magic tricks have evolved, and Top Hats are now used for more than the traditional rabbit trick!

The Top Hat and Sleight of Hand

The magician’s Top Hat is not just a piece of their costume but an integral part of the act. The magician can use misdirection and sleight hand tricks with a Top Hat.

The Top Hat can capture the audience’s attention and focus, allowing the magician to delight and amaze them with a plethora of hat-themed tricks.

Early Top Hats were made from black silk, and although they were sometimes grey too, the silk cylindrical top was mounted onto a felt base, typically made from beaver fur. Top Hats were first seen as far back as the 18th century, worn by men to complete a formal outfit ensemble.

They were usually associated with the upper classes and worn by respectable and wealthy gentlemen.

Variations of Top Hats were designed as time moved on; more notably was the collapsible Top Hat, which solved the problem of patrons having their views blocked by traditional top hats at the Opera. The collapsible top hat is still used today by magicians.

The ‘top’ in Top Hat is thought to have come from the French term ‘Haut-de-forme,’ where ‘haut’ translates as top, tall, or high. There was a lot of fashion influence between France and Great Britain during the early 18th century, hence the thoughts behind the Top Hat name and translation.

Today, Top Hats are still a fashionable accessory, and you will typically see them worn to race days and other formal events.

Just for fun, we’re going to round things off with a terrible joke.

Why do magicians wear top hats?

So, the audience can’t see their hare!