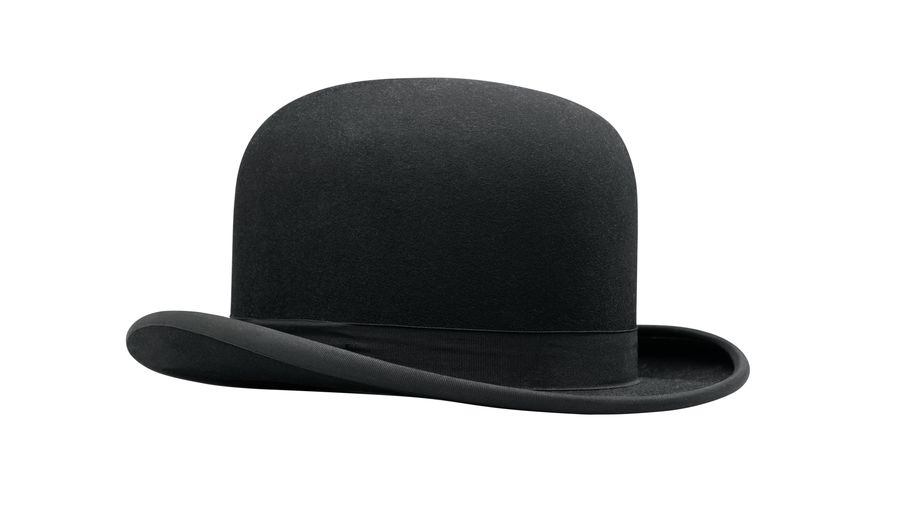 When it comes to hats, none is more English than the bowler hat. There was a time when no self-respecting banker or civil servant would venture out without one.

The bowler hat style began in Victorian England when gamekeepers wore it at Holkham Hall, Norfolk. The bowler hat’s low crown made it easier to stay on the gamekeepers’ heads as they rode through the estate. Its hardened felt also protected from blows to the head.

The bowler hat went from a working man’s protective headgear to the height of middle-class sartorial respectability.

What Is a Bowler Hat?

If you’re unclear, think Charlie Chaplin or Laurel and Hardy. For a more suave and sophisticated reminder, think John Steed.

The bowler replaced the top hat as the style of choice in the latter half of the 19th century. The bowler hat has a low rounded crown sitting above a narrow brim that curls upwards on the sides. The low crown is in contrast to the high crowned top hat.

The bowler is stronger than the top hat as it’s made from hardened felt, making it more durable and was fundamental to the bowler hat’s design.

What Led to the Creation of the Bowler Hat?

The original purpose of the bowler hat was as protective headgear, in some ways, the original hard hat.

The bowler hat’s beginnings lay at the country estate of Holkham Hall in Leicestershire, England, in 1849. Thomas William Coke decided he needed a more practical hat for his gamekeepers.

With its high crown, the top hat often fell off the gamekeeper’s heads as they rode, which was a particular hazard in wooded areas of the estate. Top hats also got easily damaged because they were somewhat soft.

Something more practical was necessary, which brought the hard-felted, low-crowned bowler hat into being.

The sturdy construction also made the bowler more durable and less liable to damage. Additionally, its lower crown reduced the risk of the hat getting knocked off by low branches or blown off while riding.

Although it was a pragmatic solution to a problem, the bowler had a smart look. The vicarious vanity of the Earl of Leicester required that even his gamekeepers had to look stylish.

Where Does the Bowler Hat Name Come From?

Coke approached the renowned hatters, Lock & Co of London, with his requirements, and in turn, Lock & Co instructed the hat maker, William Bowler, to create a prototype. It’s from the hat’s designers that the hat took its name.

Interestingly, Lock & Co originally called the hat a coke. At the time, it was the hatter’s tradition to name a custom-made hat after the first customer to order it, which in this case, was Edward Coke. Indeed, Lock & Co still refers to this hat style as a coke.

Read more intriguing facts about bowler hats in this article.

Why Was the Bowler Hat Style So Popular?

Now that you know that the bowler hat was originally a functional protective headgear for gamekeepers, it’s no surprise that it first gained popularity amongst laborers who also needed head protection.

However, Lock & Co’s ledgers show bowler orders from high-society gentlemen. So, whereas the top hat had worked its way down the social echelons, the bowler hat climbed the social ladder.

Whether you were a workman, a gentleman, a businessman, or even royalty, it didn’t matter. It was the golden age of hat-wearing, and the bowler hat was functional and stylish simultaneously, enabling it to span class divides.

It also crossed international boundaries. For example, in Bolivia, where it’s known as a bombin, women of the indigenous Aymara wear it, but in the US, it’s known as a derby hat.

Naturally, the royal connection helped. So is its adoption by entertainers like Charlie Chaplin and Laurel and Hardy.

The derby was once the hat of choice in the American West. The design, so suitable for gamekeepers, made it ideal for those on horseback in America. Billy the Kid was known for his top hat, as was the notorious Wild West outlaw Butch Cassidy.

Butch Cassidy and the Wild Bunch.

Still, most people associate the bowler hat with the stereotypical image of English bankers and civil servants or the archetypal British gent. It has become somewhat ironic considering its original use was protective headwear for workers.

Has the Bowler Hat Style Fallen Out of Favor?

It’s not that the bowler hat fell out of favor. Rather hat-wearing, in general, declined in the post-war era, and bowler hats were just a victim of that trend.

Some classic hats like the trilby, fedora, and panama have come back into fashion in recent years. However, the hat revival largely seems to have passed the bowler by.

Perhaps it’s hard to shake the bowler hat’s association with stuffy bankers and civil servants or the ridiculousness of the Ministry of Silly Walks. However, bowlers are still available for purchase.

You can even buy one from Lock & Co, but if you’re on a budget, you might need to look elsewhere. For example, this Scala Classico Men’s WooMen’st Bowler Hat on Amazon gets you the look without breaking the bank.

The bowler hat style began in Victorian England, and its design gave gamekeepers a durable and more practical replacement for their cumbersome top hats.

The practical yet stylish design made the bowler the hat of choice across all social classes and occupations. Its distinctive rounded crown remains instantly recognizable, but now perhaps that recognition is more of a caricature of Britishness than the stylish headgear it once was.