Skip to content
Home » Famous Hats » The Beloved Hats of John Wayne, Throughout His Life and Career 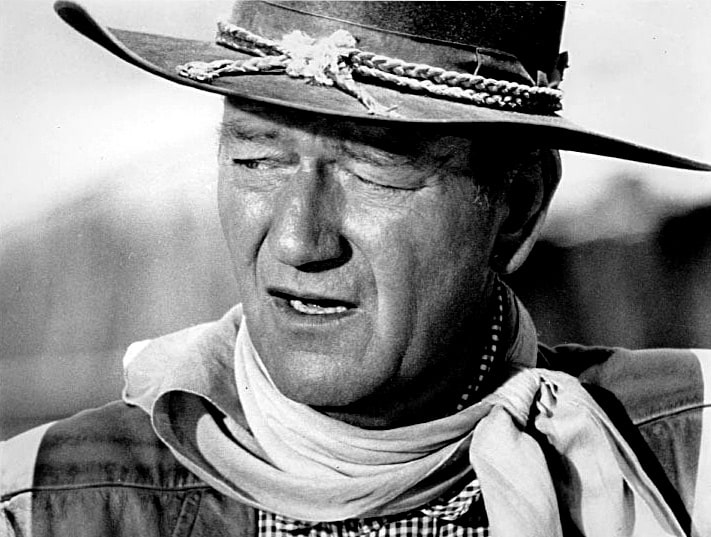 For many, John Wayne is the personification of the Western film genre. Both an actor and a filmmaker, the American artist spent his life wearing cowboy hats – both on and off the screen.

The real affinity Wayne seemed to have for his hats may have been a large part of what solidified his cowboy image to the public. Rather than seeing them as merely props, his hats truly seemed to contribute to his own identity. Instead of letting them go, the hats that accompanied him and his characters on screen would then travel with him outside of movie sets and far beyond camera range.

Hat aficionados everywhere are likely to have a favorite style, though none are likely to be quite as well-known as Wayne’s. This is not because the actor made sure to mention it in interviews or make public announcements about his preference, but rather because he wouldn’t seem to take it off. The style in question was a traditional cowboy, triangle-crease hat.

On film sets, where other actors would depend on the costume department’s orders, Wayne made sure he brought his own hat along for the ride. The 1939 film “Stagecoach,” to which his success is largely attributed, featured the actor’s personal hat – this time, the style was a more traditional cowboy hat with a single crease on the side. This particular accessory continued to be worn by him in other films for the following 20 years. In 1959, the hat retired to a glass box in Wayne’s home. Though peculiar behavior to some, this wasn’t the actor’s last time doing this.

A light brown, felt cowboy hat replaced the old trusty accessory, and also joined the actor during many of his movies. Ranging from 1961 to 1969, these included:

Years later in 2014, a $37,500 auction sale of the hat reflected the artist’s iconic Western legacy.

If you want a quality hat that resembles the John Wayne look check out this popular Stetson Marshall Cowboy hat on Amazon.

Of course, the end of John Wayne’s career had to occur in ultimate John Wayne fashion. The Western legend’s last film in 1976, “The Shootist,” once again featured what was said to be his favorite style – the classic cowboy hat with both sides pinched at the front. In the film, Wayne played a gunslinger fighting cancer, a disease he was facing in his own personal life. The actor would come to pass three years later, in 1979.

John Wayne truly blended his cinematic persona with his own personal life, whether he meant to or not. His instinct to merge his many Western characters with his individual identity allowed for his own life, personality, and charm to bleed into the screen. To Wayne, hats far exceeded their roles in the costume department. Many of the techniques used to style John Wayne’s hats were also used in the TV series Godless. Read about it in this article.

Discover some intriguing facts about cowboy hats in this article