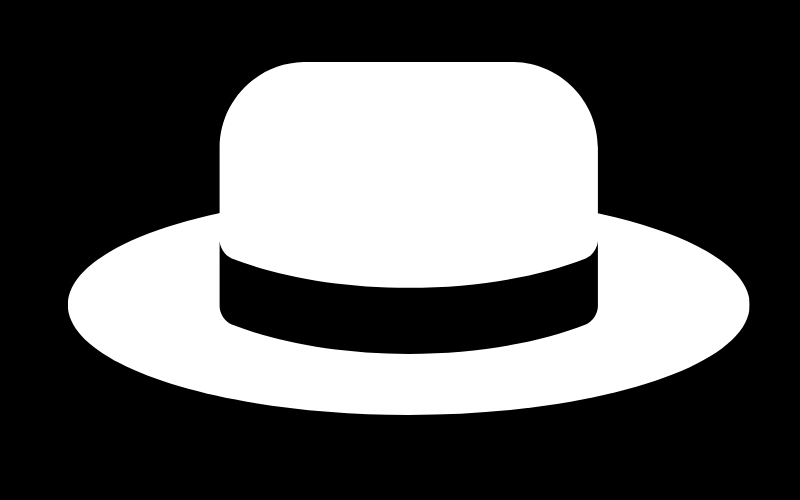 When Al Capone dressed, he did it with finesse. This infamous 1920s Chicago gangster was an impeccably dressed man who went to great pains to look ‘professional.’ But his most notable dress item was his signature hat.

Al Capone wore many different hat styles, but his favorite was the fedora. This hat exemplified the signature look and style of gangster headwear and was typically available in white or black. Other Capone-favored hats included the straw Panama, the Boater, and the Homburg.

This article will look at the hats Al Capone wore in greater detail.

A white or black fedora was the 1920 gangster’s preferred hat. This narrow-brimmed, soft felt hat came with a silk ribbon set on a crown and featured three dents.

The hat’s contrasting 4-inch (10.1 cm) band wrapped all around the base, with its distinctive front pinch and wide brim setting you miles apart from regular “gentlemen.”

He particularly favored Borsalinos like his famous white cream one, which he wore tapered at the top to produce a straight creased profile with a deep crease at the center.

Borsalino is an Italian-based high-quality brand whose fedoras became renowned after celebrities like Al Capone made fedoras their signature hat style.

These fine, ultralight, handmade hats were water repellent and made from lapin and beaver fur. And, as was the fashion back then, Capone wore his fedora slightly tilted back and merely resting lightly on his head.

Since they were crushable, fedoras were well-suited for Al Capone’s line of work. It was easy to pack them into a suitcase where they could stay crushed for some time and retain their shape.

Check out this Al Capone style fedora on Amazon.

The traditional Ecuadorian straw hat is made using plaited leaves from the toquilla palm.

Capone was rumored to have brought in a milliner (hat maker) from Ecuador to make several of these hats for him. Wealthy men often wore the Panama hat while gangsters tilted theirs slightly towards the left, adding to its flair.

The boater hat also goes by the basher, sennit, or skimmer. Initially worn by boaters to offer protection from the sun, the style soon attracted gangsters who wore the fashionable light hat from springtime to fall.

While in Florida, Capone wore his boater all year round. He also owned several of these hats, as evidenced by the many photos he snapped while wearing the stylish boater.

A homburg is a hat made of fur felt, featuring a silky, wide grosgrain ribbon, a flat brim, and a ribbon-edged trim.

However, American pop culture refers to the homburg as the “godfather” hat; unlike the fedora, which features an indented crown, soft brim, a creased crown, and pinched sides, the homburg sports a single dent (the gutter crown) that runs down to the middle of the crown.

The hat’s name originated from Bad Homburg in Hesse, Germany, where it formed part of hunting headgear. In Al Capone’s time, the homburg was offered in black or grey and mostly worn with semi-formal wear.

The hat was also generally considered a bit more esteemed than the fedora. Read more intriguing facts about the homburg here.

Another of Al Capone’s famous hats is the Biltmore hat, with this good-looking hat sporting a brim and an open crown. The crown ranges between 4-5 inches (10.1-12.7 cm) for the center crease.

The Biltmore also comes with a grosgrain ribbon and a snappable brim and is traditionally available in either grey or black.

Al Capone could also be spotted wearing a trilby hat. This stylish and sleek hat is quite similar to the fedora though there are slight differences between them.

For one, the trilby brim is relatively narrow and has short edges that turn slightly toward the rear, while a fedora sports a wide, flatter brim.

Some maintain that the trilby is better than the fedora. Find out why in this article.

The ‘gangster’ style trilby on Amazon.

The Fedora was Al Capone’s favorite gangster hat, but he also owned many other hats. He wore stylish hats like the fedora to portray a sense of status, class, and dignity. The hats also separated him from regular criminals, depicting him as sophisticated, audacious, and fashionable.

While most of these hat styles were popular in the 1920s, you can still spot men wearing some today, such as the Panama straw hat and the Godfather hat.