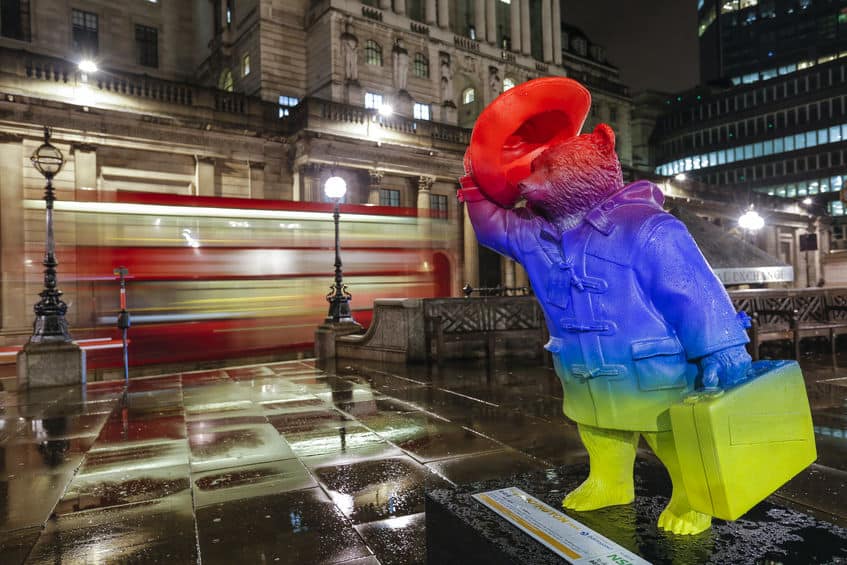 Paddington Bear is one of the most well-known and beloved fictional characters, stealing the hearts of children and adults alike since 1958 when he first appeared in a children’s book.

Since then, his trademark outfit of a hat, coat, and boots has become nearly as famous as the bear himself.

Paddington Bear wears a sou’wester hat with an upturned brim, typically depicted in red or yellow. According to the book, this traditional form of rain hat was handed down to Paddington by his uncle and was one of his few possessions when he arrived at London’s Paddington Station from Peru.

This article will take a closer look at Paddington’s iconic hat, including its backstory in the books and the author’s inspiration for including this accessory. It will also cover the different colors in which this hat has been seen throughout time and how the bear’s fashion has inspired real-life looks.

While the style of hat Paddington Bear wears is never explicitly mentioned in any of the books in author Michael Bond’s series, it is widely believed to be a sou’wester hat with the brim turned up.

Sou’wester hats are a type of collapsible rain hat traditionally made of oilskin. These hats are longer in the back than the front, allowing the neck to be fully protected from rain, sun, or other elements. The front brim can also be rolled up to form a gutter to trap water. You can see examples on Amazon.

The rather strange name of these hats is theorized to come from the Sou’wester winds common on the seas in the UK. Sou’west winds typically carry warm, moist air that leads to rain.

Fishermen in the area would usually have their backs to this wind as they hauled in their nets, allowing the rain to slide down the long back of the hat onto their coats – thus keeping their bodies dry. The upturned brim in the front kept any additional moisture away from the face.

However, most notable to Paddington Bear is how popular these hats were for young boys in Britain during the 1950s. Although Paddington is actually from Peru, he quickly becomes the quintessential British gentleman, with perfect manners and a love for all things London.

Seeing as Paddington made his literary debut during the height of sou’wester hats’ popularity, it is fitting that Bond would dress his very English bear in a very English accessory.

The Hat’s Role in the Book

Paddington’s hat is not only an integral part of his iconic look but also a considerable part of his backstory. The beloved bear had a bit of a tough beginning, losing his parents in an earthquake in his native Peru before being taken in by his Aunt Lucy.

Luckily for Paddington, Aunt Lucy taught him English and sent him off to England while she lived at the Home for Retired Bears in Lima.

When Paddington’s family, the Browns, found him at Paddington Station in London, he was sitting on his suitcase near the lost property office. Except for his suitcase, his hat was his only possession – the Browns bought him a coat and boots later.

According to an interview with author Michael Bond published by the Lancashire Post, Paddington’s famous hat was a hand-me-down from his uncle Pastuzo, making it very special.

Paddington fans will likely know that the hat is special to him for another reason. Ever the English gentleman, Paddington developed an addiction to marmalade sandwiches soon after arriving in London, having initially tried them at the Home for Retired Bears in Peru.

Accordingly, he always keeps one stashed in his hat for emergencies. While the BBC suggests this is a way of showing his civilization, it’s likely that Paddington just really likes marmalade.

It turns out that Michael Bond did not give Paddington Bear a hat simply because it was cute to depict a little bear wearing a hat. In addition to the aforementioned timeliness of the sou’wester hat in Britain, Bond was also inspired by his father.

In an interview with NewStatesmen magazine, Bond explained that his father, a civil servant, considered it essential to carry a hat with him everywhere he went so he could raise it in greeting if he met someone he knew.

Bond further explained that much of Paddington’s personality was inspired by his father as well, who he considered a proper English gentleman.

Manners were very important to both Bond and his father, so Paddington is a very polite bear. Whether intentionally or not, the bear certainly sets a great example for the children who read his stories.

Paddington’s Hat Has Many Colors

Despite most Paddington fans having a very clear picture in their minds of what his famous hat should look like, it turns out that there is actually no “right” color for the bear’s hat.

In Bond’s books, his hat is only described as “rather dirty colored,” not naming an official color. However, in Paddington’s first television series, he was depicted as wearing a black hat with a blue coat.

Despite this, most people believe that Paddington’s hat is red. According to Paddington Bear’s official website, this is the most popular color for his hat on toys, as well as the color used in the recent films.

However, it’s not unusual to run across Paddington plushes with yellow hats as this was the first hat color produced by US toy manufacturers. The UK has also produced many different hat colors over the years, making it impossible to name one official color.

This adorable Paddington Bear Classic Plush from Amazon shows the bear in the most classic version of his famous outfit, including his red hat, blue toggle coat and red boots. It even includes the tag pinned to his coat by Aunt Lucy.

As befitting a proper English gentleman, Paddington’s standard outfit is a pretty classic look. After all, a nice coat, hat, and pair of boots are timeless.

It is fitting, then, that Vogue refers to Paddington’s signature look as “really very chic,” admiring the classic charm of his navy coat and luxe monogram on his battered brown suitcase. The magazine goes as far as to suggest that we should all take some style cues from this fashionable little bear.

It seems that many people have taken this advice to heart. In 2014, during the lead-up to the release of the new live-action Paddington film starring Nicole Kidman, sales of coats resembling the bear’s went through the roof.

According to Female First, navy coats with the classic wooden toggle style experienced a 70% spike in sales. The film seems to remind people of how stylish Paddington Bear is.

The Sou’wester is a classic English hat that is an integral part of Paddington’s classic look and a reminder of his home in Peru.

Furthermore, it cements the bear as quintessentially British, as the style was popular among British boys during the 1950s. While there is technically no wrong color for Paddington’s sou’wester hat, red is the most traditional option.