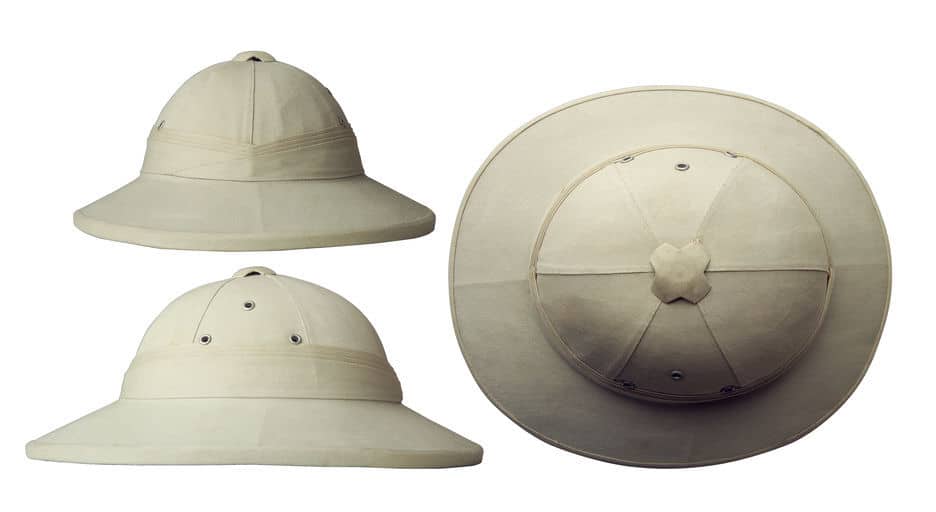 Pith helmets have a distinct shape with their round crown and straight, wide brim. You may have seen the hat in numerous movies, but there are a few facts that might surprise you.

Since the hat was so popular amongst colonizers, the hat soon became a symbol of imperialism. Today, pith helmets are more common on Vietnamese taxi drivers and Peruvian police officers.

Many people can recognize the hat by its unique silhouette. Still, many do not know its story. This article will cover five intriguing facts about pith helmets. Let’s get started.

Even though the pith helmet’s origin is still debatable, there is a consensus among historians. Many experts believe that people used pith from swamp plants in India to make the original pith helmet.

From 1850 the pith helmet was popular amongst Europeans. It was common for them to wear pith helmets in the Middle East, parts of Africa, and Southeast Asia.

The pith hat was most popular amongst a particular type of crowd in the 19th century. In particular, it was standard for missionaries, colonial officials, and soldiers to wear the pith hat while traveling the Middle East and parts of Asia.

It later became representative of imperialism because not many locals wore the hat; people associated the helmet with European officials, explorers, and travelers.

And police officers in Peru and Cameroon also wear pith helmets while on duty.

The hat is even present in modern U.S. fashion. Many postal workers wear the hat during their daily rotations, and U.S. Marine Corps coaches at shooting ranges also wear pith helmets.

The Pith Helmet Has Practical Uses in Hot Climates

This pith helmet was not always synonymous with imperialism. In hot climates such as India and Africa, many people would wear the pith helmet to protect their heads and keep their body temperature down. Manufacturers designed the hat to allow air to circulate easily; this helps keep the scalp and head cool.

Former First Ladies Were Shamed For Wearing Them

The media criticized both ladies for wearing a hat that European colonizers famously wore.

The pith hat is practical and provides optimal temperature regulation in hot climates due to its build.

Historians believe that the pith hat originated in India. During the 19th century, the hat was very popular amongst European explorers, travelers, and officials, so it soon became associated with imperialism.

Despite the hat’s polarizing reputation, they are still readily available on Amazon. Check this popular pith helmet by Mil-Tec if you want to try one yourself.