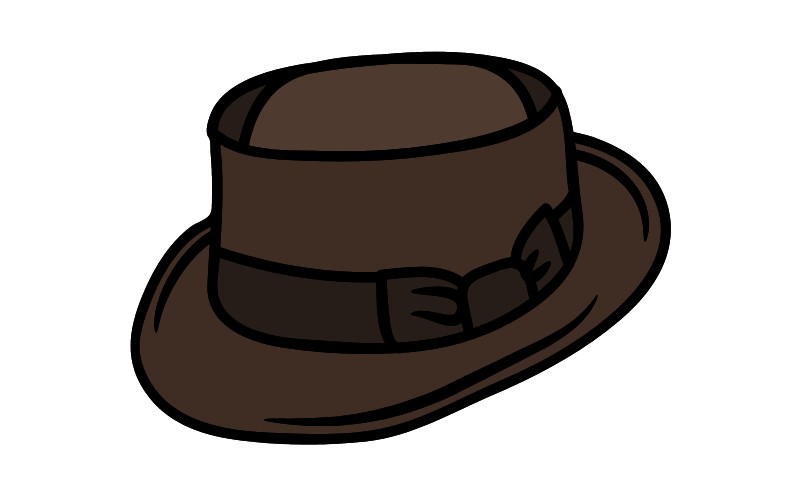 This unique style has been around since the 1800s and remains relevant.

The pie’s crust was neatly creased at the edges to prevent leakage, giving the pastry its unique look for which the hats are named. Read more about the origin of the pork pie hat in this article.

Check out this popular pork pie hat on Amazon

The First Pork Pie Hats Were Originally Worn by Women

While seemingly a male-dominated style, it is believed that the first hats to be called pork pies were primarily worn by British and American women circa 1830 to 1865.

Hats were made by coating a cotton canvas with straw, felt, and silk, and they typically had dangling ribbons or a bow with feathers where the crown and brim joined together.

At the time, it was common for women to wear pork pie hats as a fashion accessory to their elaborate hairstyles or coiffeurs.

The pork pie hat has never been more popular than it was during the Great Depression. Famous movie star Buster Keaton of the silent film era wore a pork pie as his signature hat, although they were typically modified Stetsons.

In 1958, Hanna-Barbera debuted its character Yogi Bear in a Huckleberry Hound cartoon. This funny, animated bear in a pork pie hat was ultimately much more popular than his straw-hat-wearing dog pal, and by 1961, Yogi Bear premiered as its own show.

The original version of the cartoon kept the pork pie hat prevalent until 1988. Read more about Yogi Bear’s hat in this article.

Many celebrities, including Justin Timberlake, Brad Pitt, and Robert Downey Jr., have all been spotted sporting this snap-brim in the last decade or so. Yet, without a doubt, the pork pie hat’s recent resurgence is thanks to Bryan Cranston’s character, Walter White, or more appropriately, his alter-ego, “Heisenberg,” on the AMC TV series Breaking Bad. Check out this Heisenberg hat on Amazon.

The pork pie was provided to Cranston to prevent sunburn during filming in the desert. It also harks back to the hat worn by the character Popeye Doyle in the French Connection.

Read more about Heisenberg and his hat here.

Pork pie hats have quite an intriguing history behind them. They have been fashionable worldwide for over a century, and despite having already seen their peak in popularity, they remain a timeless fashion choice still.