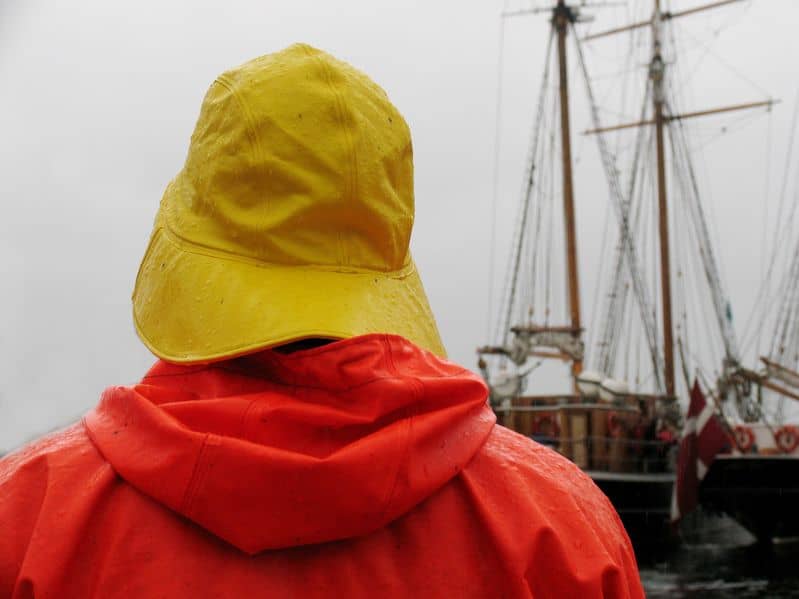 Whenever one thinks of classic rain gear, you can bet that the sou’wester hat will be a part of the assembly. If you’re a fisherman, you already know about these hats, but let’s look at some interesting facts about this popular rain hat.

The sou’wester hat was popular in the 19th century amongst fishermen, as the hat’s design kept the rain off the fishermen’s neck and face with its long back flap.

Even though hatmakers didn’t design it with fashion in mind, the hat became a part of 1950s fashion in Britain and Scandinavia.

The sou’wester hat is a great piece of rain gear with a fascinating history. This article will cover five intriguing facts about sou’wester hats, including when they were popular, who wore them, and why they work well as rain gear.

Even though we do not have any concrete evidence for the origin of the hat’s name, many historians have a consensus, as they believe the name comes from the Sou’wester wind.

These winds are most prominent in the seas surrounding the UK, which contain moist, warm air, and, therefore, often bring rain.

Because of its design, many 19th-century fishermen wore sou’wester hats. When a fisherman brings up a fish neck, he turns his back away from the wind, which would results in rain and water splashing down the fishermen’s neck and jacket.

However, the hat has a long flap in the back that extends down the neck, while the front has a brim that rolls up in the front, which works as a gutter to keep the rain out of the face.

During the 19th century, designers of rain gear avoided adding buttons to raincoats since they could get caught in the fishing net. Another thing that coats did not have was hoods, which would limit the fishermen’s view and lead to accidents.

Hatmakers came up with the sou’wester to act as a hood but designed it in a way that wouldn’t limit the fishermen’s view.

Johan Peter Fugellie, who lived on a farm in Norway, ran a sou’wester hat factory during the 19th century. His mother ran an asylum, so Johan recruited the girls from his mother’s institution to help with cutting and stitching.

During the first few years, Johan made around 400 hats every year, and as the business grew, he made a few thousand every year.

The Hat Became Fashionable in the Fifties

Even though designers never meant the hat to be a fashion piece, Britain and Scandanavia started incorporating the fishermen’s hat into their fashion.

The hat was most popular amongst British and Scandinavian kids in the 1950s, and if you time-traveled back to that time on a rainy day, you would see kids jumping in puddles wearing sou’wester hats.

Sou’wester hats were very popular in the 19th century amongst fishermen for their functional design.

The hat had a long flap in the back to protect the neck from rain, and in the front of the hat was a roll-up brim, which acted as a gutter to catch rain, preventing water from running down the fishermen’s face.