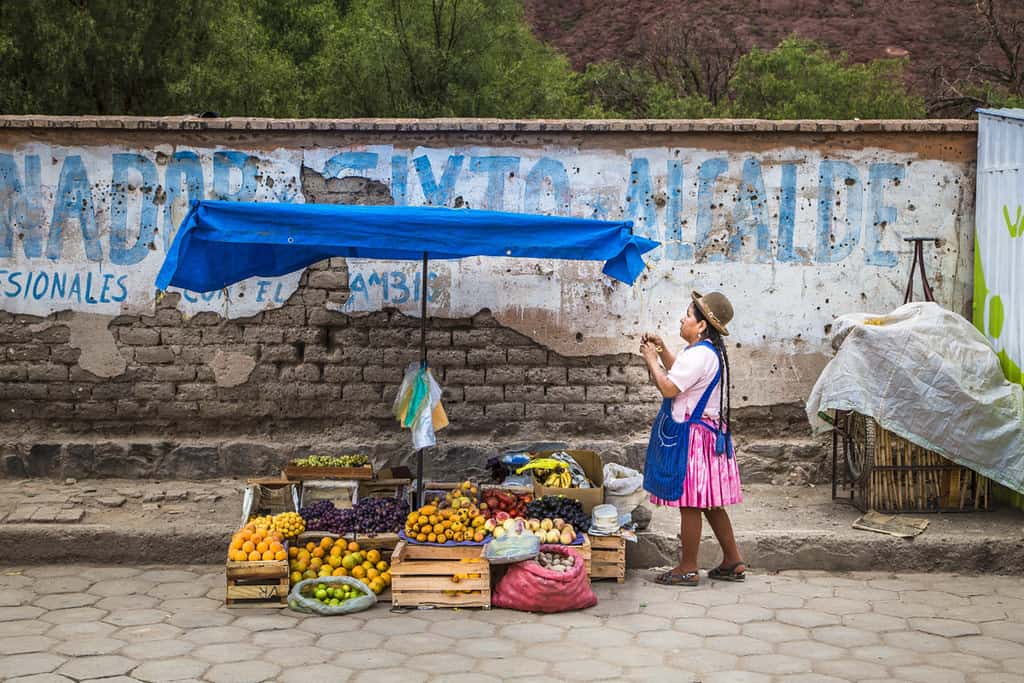 If you’ve ever traveled through Bolivia, you may have been surprised at the prevalence of the bowler hat worn by women in the region. It’s become a part of traditional dress for many women throughout the South American nation.

Bowler hats are popular with indigenous Aymara and Quechua women in Bolivia due to their strong connection to identity. When British railway workers initially introduced them, the hats that arrived were too small. Locals sold the undersized hat in markets, becoming popular amongst local women.

The Bowler and Bolivian Cholitas

The bowler is a brimmed felt hat that originally was black in appearance. The central part of the hat is bowl-shaped, and its brim is slightly upturned. Due to its processing, it’s usually a stiff or hard hat. However, when it arrived from England in Bolivia, it began to take on a life of its own with the local women.

Bolivian cholitas – indigenous Aymara and Quechua women – have given a new look to this English tradition.

While the bowler was first worn as a close-fitting hat, the cholitas choose to perch it on the top of their heads. They also infused their taste into the angle at which they wear it. They may choose to tilt it to the front, back, or to either side.

Due to the placement on the top of the head, women would use bobby pins to hold the hat in place. This helps secure the hat at the wearer’s preferred angle and style. You’ll also see color variety in Bolivia, breaking its black felt tradition.

Now produced locally in Bolivia, the bowler hat style changes each year slightly. The shape of the brim and the height of the hat will change, making the hat a constantly evolving piece of local fashion. The colors change, too, often a range of muted colors with decorative trim.

History of the Bowler in Bolivia

During colonization, many British railway workers traveled to Bolivia to work. Since the bowler was a common hat choice in their industry, it came with them to Bolivia.

The story goes that a local Bolivian merchant ordered a shipment of bowlers in the hopes of selling these goods to European workers. However, they were too small to fit the railway workers properly when they arrived.

To avoid letting the hats and his investment go to waste, the local shop began selling the hats to Bolivians. Since the hats were small, they perched on the wearer’s head. The fashion particularly caught on with the indigenous women of the region.

It has been over 200 hundred years since this tradition began in Bolivia. The women of indigenous communities wore bowlers as they passed on their other traditional clothing styles to their daughters and granddaughters. Nowadays, the hat is a symbol of indigenous pride and identity.

While wearing a bowler as a woman in Bolivia is a beautiful fashion statement, it also expresses heritage, tradition, and pride. The hat’s popularity continues to be passed on as a cultural tradition, which will likely continue to be popular in Bolivia for generations to come. The tradition is also found in Peru.

Read about hats worn in Peru in this article.

A Brief History of the Bowler

The bowler is a hat that has enjoyed a varied and interesting role in fashion across continents. Its story begins in 1849 with a man named Thomas William Coke.

He was the brother of the 2nd Earl of Leicester with a large property in Norfolk, England. On his estate, he had a team of gamekeepers to tend to his animals. These men originally wore tall top hats as part of their work uniform, but this was an impractical choice for this line of work.

The gamekeepers constantly faced the wind, branches, and other natural elements that knocked the tall top hats right off their heads. As these hats toppled off each time, they were prone to damage, and Coke needed to purchase new hats for his gamekeepers more often than he’d like.

Coke went on a mission to solve this problem. He traveled to a hat shop named Lock and Co in London. Coke asked the shop to make a custom hat that would fit the head more tightly than a top hat and more easily stay on the head of the person wearing it. He also asked that it be protective against the elements of gamekeeping.

The hat company agreed and contacted Thomas and William Bowler, two local hatmakers. The Bowler brothers made a new style of hats using new innovative tactics. They used animal fat in the process of felting and shaping the hats. The fat acted like glue, making the hat very hard at the end of the process.

The hardness of the hat satisfied the Cokes, offering the gamekeepers a good amount of protection. The hats were brought back to the estate and used as intended.

However, the story doesn’t end there. The Bowler brothers began to produce these hats for the public. Although the first version they made fitted quite close to the head, they began to make other styles where the hat would sit up more on the wearer’s head and be more fashionable.

The hat continued to be popular with the working class. Because of its hardness, it offered protection for many different types of professions. People working in mines or on the railroads were likely to be found wearing a bowler hat.

The Bowler and Colonization

As England became increasingly active in its colonization pursuits, the bowler went with them. We’ve seen how the hat made its way to Bolivia, but that wasn’t its only destination. It also had a considerable impact on the United States during this time.

In 1778, the bowler made its way across the pond to the United States. Edward Smith Stanley, the 12th Earl of Derby, held a horse race where the bowler hat became introduced to the American public.

Because it was a hard hat that would stay on your head, the bowler was a perfect choice for horse racing. Due to this connection between the horse races and the Earl of Derby, the hat commonly became known as a “derby hat” in the United States.

Although a cowboy hat is often used to depict the men of the Wild West in cinema and popular culture, the reality is that the bowler (or derby) was a more common choice for their headwear. It was the perfect hat to wear when riding a horse and was often used for that purpose in the expanding United States.

You can see the bowler in cinematic history as well. Comedic pair Abbott and Costello, as well as Charlie Chaplin, was famous for sporting black bowlers. The bowler took on immense popularity in many industries. You can see the bowler perched on the head of many powerful men throughout history, such as a young Calvin Coolidge and Winston Churchill.

Although the bowler has enjoyed significant popularity on many different continents, it’s perhaps most alive today in Bolivia. As the native women continue to pass on the tradition of perching these hats on the top of their heads in the style and color of their choosing, it’s a style we’re sure to see in Bolivia for years to come.