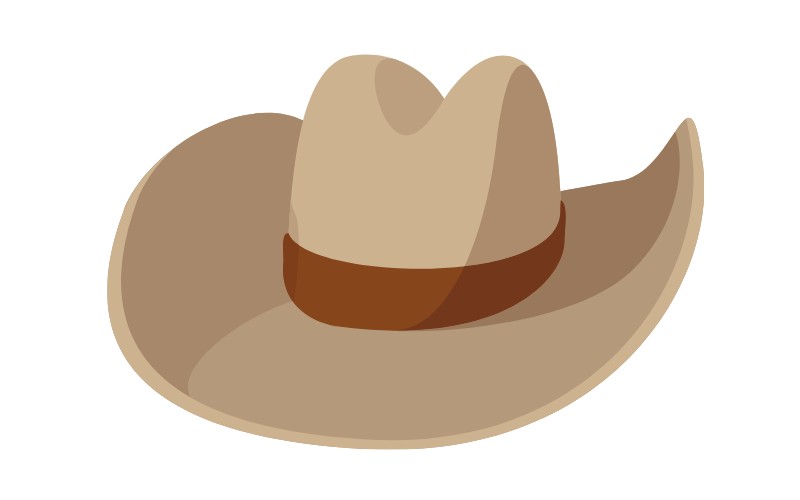 The cowboy hat has its roots as a working hat. Functionality has always been at the heart of cowboy hat development. From Stetson’s earliest designs to the more recent editions cowboy hat design has always been distinctive and practical. Style has played a greater role over time as can be seen in the evolution of styles.

The cattleman is probably the most common cowboy hat style. One of the first styles to feature the center pinch, dates to the early 19th century. The earliest cowboy hat designs had a rounded crown. The distinctive cattleman crease has a central crease with two outer creases.

First associated with ranch owners it is regarded as a gentleman’s hat and is often worn at more formal events such as weddings. The crease made it far easier to remove the hat with one hat and its large crown offers greater protection from the elements.

A popular variation of the Cattleman is the Gus. The Gus is characterised by by a sloping taller crown. The back of the crown stands out as significantly higher than the front. It gets its name from the character Gus McCrae for who it was designed. Played by Robert Duvall he stars in the miniseries Lonesome Dove. The hat was designed by Manny Gammage of Texas Hatters.

Linked to the popularity of riverboat casinos the gambler hat became a popular style in the mid 1900s. This style adopts the telescope crown also popularized on pork pie hats . Gambler hats also have a distinctive up turn on the brim. Perhaps most famously worn by Rhett Butler in Gone With the Wind the gambler style is instantly recognizable. This gambler style from Stetson is a very popular example (Amazon).

The first cowboy hats all had a rounded crown. Known as ‘Boss of the Plains’ the first designs by John Stetson set the tone for the cowboy hats to follow. This style has largely been replaced by hats with creases. Hats such as the Stetson Open Road were originally sold as open creases and people would style their own creases on the road. You can check it out on Amazon.

John Wayne’s style of choice, the teardrop crown also known as a diamond or triangle crease is a popular choice among many. The Stetson Carson is a typical example of this style. You may recognise this style as those seen on fedoras. The brim on a cowboy hat is larger than a fedora and often features and upturn on the brim, originally designed to keep the hat away from a lasso. You can read more about the differences here.

The Dakota is unique in that the crown is creased on four corners forming a rectangle shaped crown. Traditionally the Dakota is favored by bull riders.