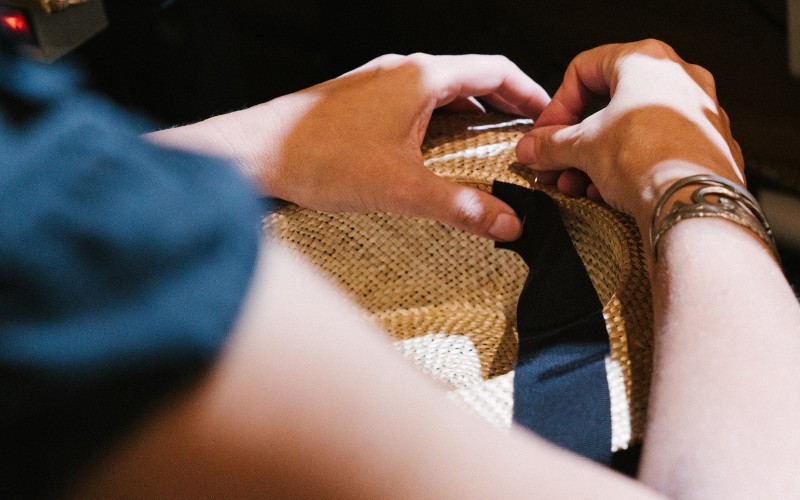 Like many of our favourite terms, the word “Milliner” carries within itself fascinating etymology, reflecting the history of the hat making profession throughout the years.

The term originated from the word “Milaner,” or “Milener,” referring to a person who was a native of or residing in the Italian city of Milan. Still famous today as one of the fashion capitals of the world, Milan has always been known for its riveting, lively scene and quality goods. In the past, these items included things such as bonnets, fabrics, jewellery, and cutlery.

Milaners were then consequently associated with this regional characteristic. The meaning of the term further evolved and is believed to have taken on the meaning of “a dealer in small articles appertaining to dress, such as thread, tape and ribbons.”

The first official record of the word milliner is said to have been published in The Guardian in 1713 – the year most commonly agreed as the time during which the word “milliner” began being used in its modern context. The section of the news article famously reads:

“The Milliner must be thoroughly versed in Physiognomy; in the Choice of Ribbons she must have a particular regard to Complexion, and must ever be mindful to cut the Head-dress to the Dimensions of the Face.”

A more straightforward definition of the term at the time reads: “a woman who makes and sells bonnets and other headgear for women.”

Interestingly enough, the term Milliner refers to those who make women’s hats, specifically. While this may not be breaking news for the hat enthusiasts out there, it is true that the formal definition of milliner specifies professionals who make hats for women. On the other hand, “hat maker” is specific to those who produce men’s hats.

This distinction, as many of us know, is not widely made in the colloquial use of the term nowadays; in fact, most people would arguably be oblivious to these aspects of the definition entirely.

The term milliner has been used to refer to hat makers for years in informal language, regardless of their specific or individual work. The same goes for hat makers; the terms are commonly interchangeable by members of the hat-making community and ‘outsiders’ alike.

Even as the distinction lessens in relevance, it is interesting to learn the motive behind it. The creation of these two separate terms may be attributed to the fact that men’s and women’s hats during the 19th and 20th centuries required quite different sets of skills.

Though modern dictionary definitions still tend to include gender-based distinctions between the terms hat maker and milliner, the fashion industry inches continuously closer to unisex styles. Headwear is included in the mix, and it won’t be a surprise to discover an official definition change in years to come!

Whether or not you are a hat maker yourself, it is undeniable that the term used to refer to professionals in this field reflects fascinating pieces of history.