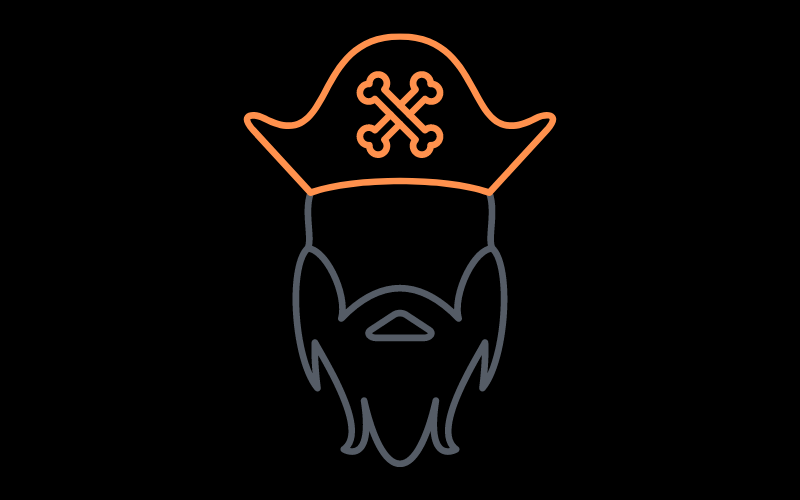 Jack Sparrow is well known for his black pirate hat, one of his most prized possessions throughout the Caribbean film series.

While Jack’s hat obsession is common knowledge, the exact type of hat he wears is not. However, don’t worry. This article will fill you in on Jack’s legendary hat.

Jack Sparrow wears a tricorne, a three-sided hat with upward-turned brims. While some real-life pirates wore this style of hat, it was most commonly worn by gentlemen of the aristocracy and military personnel.

Who Is Jack Sparrow?

Jack Sparrow is the legendary pirate featured in the Pirates of the Caribbean film series and played by renowned actor Johnny Depp. Fans worldwide love Jack for his wit, charm, and trickery.

When it comes to Jack’s personality, he is best known for his cunning, which helps get him out of challenging (and sometimes life-threatening) situations.

He is generally self-interested, doing whatever will benefit him the most. However, his better tendencies shine through every once in a while, and he chooses to help others.

Throughout the series, Jack Sparrow loves three things more than anything else in the world: the sea, his ship, the Black Pearl, and his hat.

Jack Sparrow wears tall brown sea boots and linen trousers. He has a red and white striped sash on his waist where he stores his pistol. Additionally, he wears a white undershirt with a blue waistcoat that is faded from overuse.

Sometimes, Jack wears a long brown overcoat. However, he regularly removes it if he gets too hot or needs to go for a swim. Additionally, Jack has a red bandana around his head, which keeps his long brown hair out of his eyes.

Lastly, Jack wears his famous hat. Originally Jack’s hat was black, but its color faded due to sea salt and the intense Caribbean sun, making it a lighter brownish color.

Although his hat is battered and sea-worn, it is still stylish and charming, making it one of Jack’s most prized possessions.

He goes to great lengths throughout the series to keep it with him, rarely taking it off (willingly, that is)!

Check out this Jack Sparrow-style hat on Amazon.

Why Is Jack Sparrow’s Hat So Important to Him?

In the book series about Jack Sparrow written by Rob Kidd, we learn why Jack’s hat is meaningful.

In the series, one of the earliest things Jack Sparrow concluded as a teenager was that he needed to “acquire the perfect hat.” Jack felt that before becoming a successful pirate, he needed to obtain the ideal hat.

Jack spent a lot of time trying to find the perfect cap, going through several, until he recovered his iconic hat from Shipwreck Island, which he is best known for today.

What Is Jack’s Hat Made From?

Jack’s hat was made of leather, but they had to change it to rubber. Apparently, during filming, Johnny Depp kept throwing his leather hat overboard (whether accidentally or on purpose is still unclear).

Water ruins leather, so the costume crew would have to make him a new one each time this happened. Eventually, they became fed up and made him a rubber hat that could float and withstand the water.

What Type of Hat Does Jack Sparrow Wear?

Jack Sparrow wears a distinctive hat called a tricorne. A tricorne is a three-sided hat with upward-turned brims. The brims are placed with lace, buttons, or pins, giving the cap a triangular look. This hat style was fashionable from the 18th century until the mid-19th century.

History of the Tricone Hat

Some pirates did wear tricorne hats, but not how they are shown in movies. Whereas Captain Jack Sparrow wears his hat with one of the three peaks facing forward, actual pirates would wear them with the broad side facing the front to make it harder for the wind to catch.

Although some pirates wore these hats, they weren’t common. Real pirates were much more likely to wear Knitted Monmouth Caps, rounded caps ideal for keeping their heads warm and dry as they sailed the seven seas.

Tricorne hats were most commonly worn by the aristocracy’s stylish gentlemen or military and naval forces as part of their uniforms.

Many high-class gentlemen during the 18th century loved wearing tricornes because their rolled-up brims permitted them to show off their fashionable wigs.

Additionally, the tricorne’s brim was smaller than other hats’ brims of the time. This made it easier for gentlemen to tuck it underneath their arms whenever entering a building, which was considered proper etiquette.

Even more, some tricorne hats had laced sides that could be loosened. This allowed the gentlemen to lower their brims over their faces during inclement weather.

Read more about famous people who wore tricorne hats in this article.

Jack Sparrow wears a tricorne, a three-sided hat popular in the 18th and 19th centuries. While some real pirates wore this hat, it was less common than other hats like the Knitted Monmouth Caps.

Although Jack Sparrow’s hat isn’t the most historically accurate cap the directors could’ve chosen, it is a staple of his look and is symbolic of the character we’ve grown to know and love today.