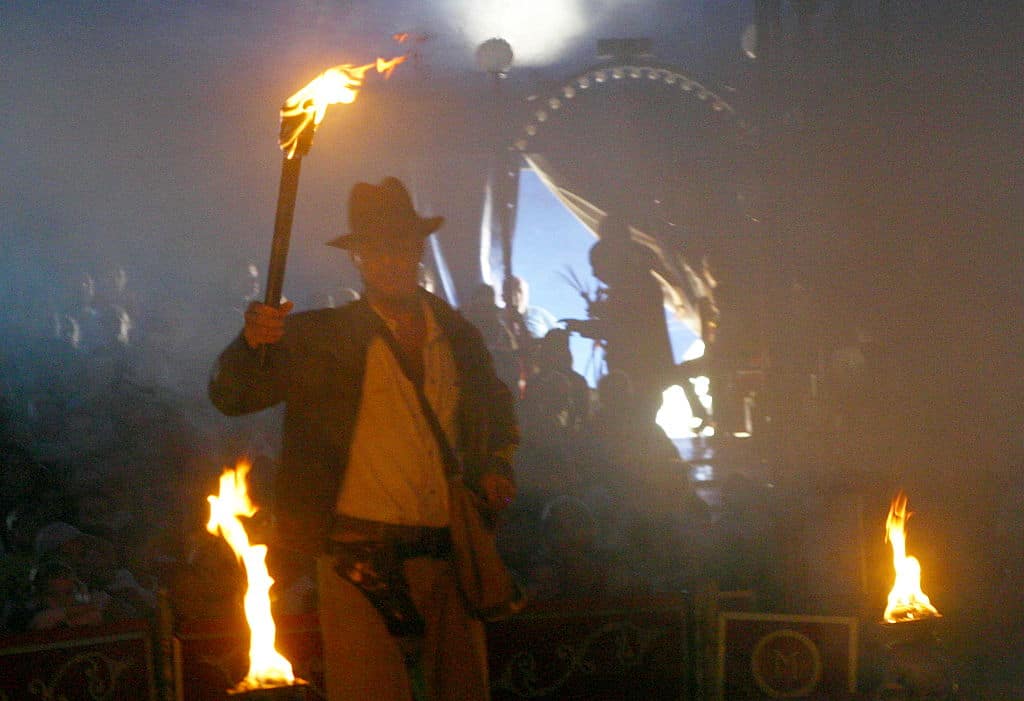 Indiana Jones is not complete without his hat and his whip. Even though many people can picture the famous hat, not many people know what kind of hat it is.

Indiana Jones wears a wide-brimmed, high-crowned sable fedora made of soft rabbit felt. The Herbert Johnson hat company designed the fedoras that appear in the first three original movies, while Adventurebilt hat company made the fedora in the last movie in 2008.

Although the hats might look the same to some people in each movie, Harrison Ford is sporting a different fedora in each one.

The famous hat of Indiana Jones is a high-crowned, wide-brimmed sable fedora. Although the brown hat was the most sentimental for him, Jones did sometimes wear a gray hat. You can see Jones sporting the less popular gray hat in the Raiders of the Lost Ark film.

The first hat chosen by the Raiders of the Lost Ark costume designer was made of soft rabbit felt and a wide brim. It was an Australian model from the Herbert Johnson hat company. If you visit the company’s website, you can buy a replica of the original Indiana Jones fedora hat featured in Raiders of the Lost Ark. Read more intriguing facts about fedoras here.

The Hats In Each Indiana Jones Movie

As mentioned, Indiana Jones does not wear the same hat in every movie, although they have significant similarities. All three hats from the first three movies were from the Herbert Johnson hat company. They were all rabbit felt, although each hat has a different block shape.

Blocking is the process of giving a hat its unique shape. Let’s look at the hats Indiana Jones wore in each movie.

Looking closely at the hats worn in the movies, it is possible to detect slight differences in the fedora’s indentations. So even though the first three movie hats were made of the same material by the same company, each fedora block shape was a bit different.

Let’s take a deeper look into each hat Harrison Ford wore in the movies.

The Hat in Raiders of the Lost Ark

There were two fedoras featured in this movie. The first one was the sable hat. This is the most famous hat. The hat was made of a floppy, lightweight rabbit felt. The felt was very similar to the materials used by hat makers in the period that the movie was set in.

The block used was a straight stove-pipe shape with a little taper on the sides of the hat. This hat was also positioned a bit differently on Harrison Ford’s head; it was turned just slightly, giving it more of a distinct shape.

The second hat featured in the movie was the gray fedora. This hat was featured on the Pan Am airplane in the film and on the steps in Washington at the movie’s end. Herbert Johnson also made this hat with the same block shape as the previous sable hat. However, the hat was not as distressed as the first one since it was meant to be a formal hat.

The Hat in the Temple of Doom

The fedora for the second movie was made of a Borsalino felt instead of a Cury felt. This felt was much thicker than the first hat, which gave it a different look. Furthermore, Herbert Johnson used an original block to crease the hat, which contributed more to the distinctively different look than the original hat. This particular hat had a shorter crown than all of the others.

The Hat in the Last Crusade

For this movie, Herbert Johnson used a similar block shape as the hat in the first movie. The company still used the Borsalino felt, the same as the Temple of Doom material, but the hat still looked more similar to the Raiders of the Lost Ark fedora. On this particular hat, the crown is un-tapered, and the hat has a more smooth, un-bashed look.

The Hat in the Kingdom of the Crystal Skull

This hat was made using the same block shape and dimensions as the one used in Raiders of the Lost Ark, giving the fedora a similar look. Adventurebilt Hats also designed a gray fedora resembling the one in the first movie.

How Did the Famous Hat Come to Fruition?

Deborah Nadoolman Landis designed the hat. She worked closely with Harrison Ford, George Lucas, and Steven Spielberg to give the hat a character of its own. Landis wanted people to be able to recognize the hat based on the silhouette alone.

Her initial hat had a very wide brim and a high crown. After a few fittings, Landis adjusted the width and crown to the perfect fit for Harrison Ford. There has been a bit of controversy regarding the exact original model. While Landis says it was an Australian model, Richard Swales, a Herbert Johnson manager at the time of the fittings, is convinced it was the ‘Poet’ model.

Landis and Spielberg were inspired by the fedoras worn by Humphrey Bogart and Charlton Heston in some of the actor’s top movies (Secret of the Incas, The Treasure of the Sierra Madre). Lastly, Landis settled for an earthy color for the fedora to reflect Indiana Jones’s career as an archeologist.

Undoubtedly, the designers succeeded in creating one of the most recognizable looks in movie history.

Where Can I Buy an Indiana Jones Hat?