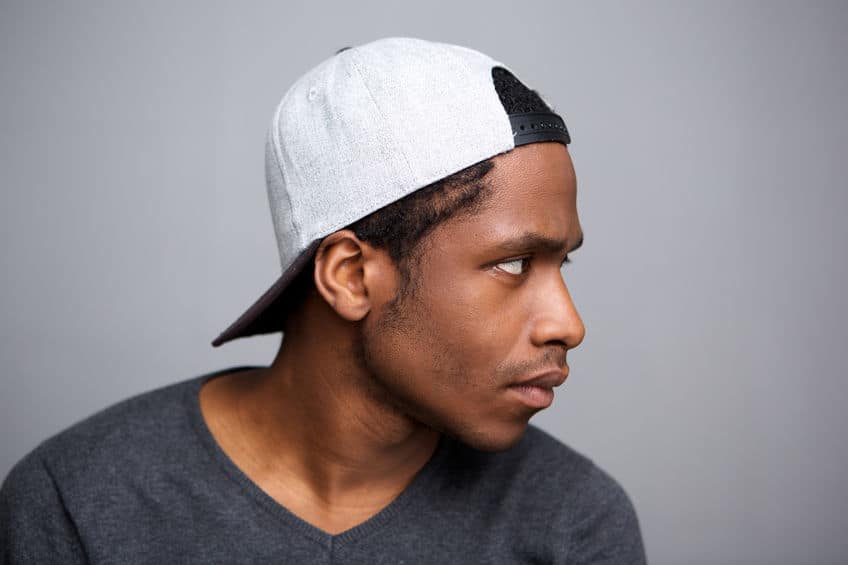 The story of the polarizing trend.

If you’ve successfully gone through middle school, you probably know that a backward hat is a universally acknowledged “cool” look. From athletes to musicians, everyone seems to feel a little more fashionable when turning their cap around.

The trend to wear hats backward gained momentum with Ken Griffey Jr., a popular baseball player in the 1990s. The trend later spread throughout the hip-hop community and other sports, further establishing backward hats as a fashionable look anyone could achieve. It is still a popular trend today.

This article will explore how the trend grew throughout popular culture, including athletes, musicians, and other celebrities that helped popularize the look.

How the Backwards Hat Trend Took Off

The trend exploded in the early 90s, with athletes, celebrities, and children all flipping their hats around for the sake of fashion. While sources differ on who is responsible for the trend, many agree that Ken Griffey Jr. was one of the first people to bring backward caps into mainstream culture.

He’s a member of the Baseball Hall of Fame, 13-time All-Star, and perhaps most impressively, the seventh most prolific home run hitter in MLB history. With this incredible record, it makes sense that his fans would want to emulate everything he did.

For fans, Griffey Jr. was equally as well-known for his style as his skill on the field. When he was inducted into the National Baseball Hall of Fame, his fans suggested his plaque depict him with a backward hat.

This look quickly became Griffey Jr.’s signature. However, not everyone was a fan of this look. A 1994 New York Times article reported that Yankees manager Buck Showalter thought Griffey Jr.’s appearance showed a “lack of respect for the game.”

Griffey Jr. later revealed that wearing his cap backward was never supposed to be a big statement. According to Yahoo Sports, the outfielder explained that this style was merely a habit he’d picked up from childhood.

He used to wear his dad’s hats all the time, but since they were bigger than his hats, they never fit and would fall off. Griffey Jr. began flipping the hats around to help them stay on his head and said the habit stuck.

Regardless of why Griffey Jr. decided to turn his cap around, he soon sparked copycats. Before you knew it, the whole world seemed full of people with backward hats. Let’s take a closer look at how this trend spread and what celebrities helped to make it so popular.

Read more about why baseball hats were invented here.

How the Trend Gained Popularity

People have followed fashion trends set by celebrities for as long as history has been recorded.

This is due to social comparison theory, explains Psychology Today, where humans tend to evaluate themselves in comparison to others and feel that they’re doing better when they’re doing what successful people are doing.

As celebrities across different fields and interests began wearing their hats backward, the trend quickly spread to the average person.

Perhaps no subculture is more associated with backward hats than the hip-hop community. Hip-hop and rap music exploded in the early 90s when Griffey Jr. started showing up on television screens wearing his baseball cap backward.

For members of the hip-hop community spreading messages of questioning authority and rebelliousness, wearing their hats backward was a subtle way to show that they were ready to change up the game.

The hip-hop generation already had a long-standing relationship with the humble baseball cap, explains The Undefeated. Popular artists used it as a fashionable way to represent their hometowns, with artists like Aaliyah, Ice Cube, and Jay Z becoming well-known for their respective Chicago White Sox, Detroit Tigers, and New York Yankees caps.

Countless other hip-hop artists were soon photographed wearing their trademark hats backward, including:

Rappers and hip-hop artists were arguably the biggest fashion influencers of the 90s, with both their fans and other celebrities copying their clothes, shoes, jewelry, and other accessories.

These artists have always presented themselves as the epitome of cool, leading others to want to emulate their style to give off the same impression. This continues to apply to today’s hip-hop artists, with artists like Cardi B and ASAP Rocky even modeling for fashion designers.

Free Stylin’: How Hip Hop Changed the Fashion Industry, available on Amazon, goes into further detail about the unique relationship between hip-hop and fashion and how the genre completely transformed the fashion industry.

It makes sense that since the backward hat trend began with a baseball player, it would be seen widely throughout the sports community. Griffey Jr. started the trend within his sport, with many other players on his team and others flipping their hats around.

Lleyton Hewitt is universally considered the player responsible for normalizing the backward hat in tennis during the late 90s. Unlike other athletes, however, tennis players began to wear their hats this way during their matches.

If you needed more proof of how ubiquitous the backward cap was in the 1990s and even the 2000s, look no further than popular children’s television shows.

Shows like Growing Pains, The Fresh Prince of Bel-Air, Boy Meets World, Mary Kate and Ashley movies all featured characters rocking the backward hat. Even Ash Ketchum, the animated Pokemon series star, turned his cap backward when he was ready to enter a Pokemon battle.

The fact that children adopted the trend boosted it further. There’s something about a backward hat that gives off an air of “nonchalant rebelliousness,” explains Bustle, which is precisely what makes people feel so cool. While people of all ages turn their hats backward, the look will likely always give off an impression of youthful freshness.

Current Perception of the Backward Hat

Backward hats are still oddly polarizing. Some people hate the style, while others love it, saying it’s both practical and fashionable. The biggest debate appears to be at what age it stops being appropriate to wear a cap.

For example, former president Barack Obama received a surprisingly large amount of criticism when he was spotted wearing his hat backward in 2017.

Many people dislike backward hats because they will forever associate them with the hip-hop culture of the 90s, which they consider to represent lawlessness and trouble-making.

However, the fact that a former president wears his hat this way should be proof enough that it’s truly just a choice. With celebrities like Kylie Jenner, Justin Bieber, and Rihanna rocking their hats backward, it’s clear that this trend won’t go anywhere anytime soon.

While it’s hard to pinpoint exactly where the backward hat trend began, it can be attributed to Ken Griffey Jr., a baseball player that brought the trend into the public eye.

Popular rappers and hip-hop artists adopted the style in the 90s, further spreading the trend. With modern celebrities, athletes, and average consumers alike all rocking the look well into 2022, it’s likely that backward hats are here to stay.