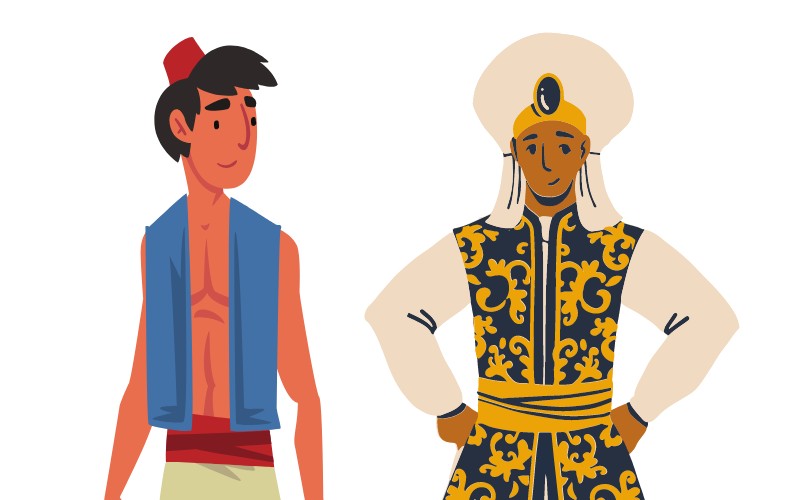 If you have watched the Aladdin Movies, you may be wondering what hat Aladdin is actually wearing.

In the Aladdin movies, Aladdin wears a turban and a red fez hat. The fez, also known as a tarboosh, is a cylindrical hat made from silk. It was popularised in the Ottoman Empire by Sultan Mahmud II around 1829.

We will take a look at the history and the background of this hat and why Aladdin is wearing one.

Where Is the Aladdin Movie set?

The Aladdin movie is not set in a specific time or even a real place. The fictional location in the Disney movie is Agrabah.

Originally the movie was intended to be set in Baghdad, but the movie’s timing overlapped with the First Gulf War. Roy Disney decided that it should not be set in a war zone.

The decision was made to form a fictional name inspired by reordering many of the letters in Baghdad.

Iraq, where the movie’s creators envisioned Aladdin, had been part of the Ottoman Empire.

How and When did the Fez Become Popular?

The Fez hat was popular due to the wishes of the Sultan of Morocco in 1829. He ordered officials to wear fez hats in the place of turbans.

As a result, the popularity of these hats spread among the populace throughout the Ottoman Empire and beyond. At the time, many regarded them as a symbol of modernity. Read more intriguing facts about fez hats here.

Why Does Aladdin Wear a Fez Hat?

The fez hat was not popularised until the early 1800s, so it is perhaps unlikely that Aladdin would have worn a fez hat. While the movie is not set at any particular time, it appears to be earlier than the 1800s.

It would perhaps be more accurate if Aladdin wore a turban, which he does during some parts of the movie.

The use of both forms of headwear is in keeping with how the movie creates a fictional world, only loosely matching the culture it is inspired by.

Do want to look like Aladdin? Check put this popular Aladdin costume set with hat included on Amazon.

Why is the Fez Hat Red and Where Does its Name Come From?

The Fez hat gets its name from the Moroccan city of Fez. This name was given because the red color of the hat comes from crimson berries sourced from the town of Fez.

After the popularity of the fez waned after the fall of the Ottoman Empire in the early 20th century, the hat remained a symbol of Morrocan nationalism and is still more popular today.

Who Else Wears a Fez in Aladdin?

In addition to Aladdin, the monkey Abu also wears a fez hat, although his hat has a purple base and red top. The fez hat is often worn with a tassel, but these are not evident on the hats worn in the Disney movie.

Read about some people famous for wearing fez hats here.