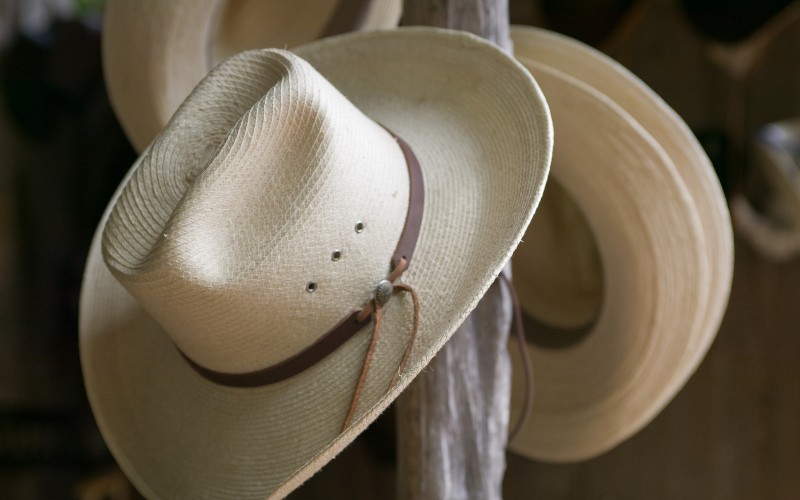 When you think about a cowboy, you automatically picture a man wearing the iconic cowboy hat. Perhaps the most well-known cowboy hat brand is Stetson, a brand created in 1865. Several things make Stetson hats unique.

Stetson hats are unique because they’ve been in production for over a century, first launched in 1860 by John Stetson. The hat’s crease reveals a lot about the owner, like the Cattleman crease popular amongst cattle owners. Indiana Jones wore the hat, and it’s common headwear in police officers.

How much do you know about this legendary hat brand? This article explores the history and the versatility of the Stetson hat, focusing on the aspects that make it unique.

Today, cowboy hats are available everywhere. However, the Stetson hat is considered the original cowboy hat. John Stetson created the original hat out of beaver felt in 1860 while he was exploring Colorado. It had a wide brim and protected his head from both the heat and the rain. Learn more about beaver pelts and hats in this article.

He sold the hat for a gold nugget, and, in 1865, he established a hat company named after himself. He created the original cowboy hat, called “Boss of the plains.”

You Can Customize Stetsons With Creases

While Stetson hats are mass-produced in a factory, each owner can customize them. Owners would heat the hat in hot steam, bending it to form a crease in certain areas. When the hat cooled, the crease would remain.

The style of crease can tell you about the owner. For instance, the ‘Cattleman crease’ is seen in cattle owner’s Stetson hats. Other prevalent creases are the tycoon, the bull rider’s crease, and the horse crease.

Stetson Hats Can Double as a Fan & a Water Container

While Stetson hats are used primarily as hats, they’re incredibly versatile and took on several roles in the West. Because of their shape, you can use them as a fan to cool down or fan fires. Stetsons can also smother a fire!

Some people even use Stetson hats to store water. One advertisement for a Stetson showed a cowboy giving his horse a drink of water from his hat.

In the 1980s, as Indiana Jones was becoming a pop-culture staple, Stetson designed hats inspired by the ones Indiana Jones wore. These hats are called the Temple Fedora and are available in various colors from the official Stetson store and on Amazon.

Stetson Hats Were Part of Military and Police Uniforms

Stetson hats have been part of military uniforms throughout history. In 1901, the South African Constabulary wore Stetson hats, while in 1905, the Legion of Frontiersmen sported them.

Discover here why Stetson hats can be so expensive. Stetson hats are unique all-around. They have a rich history, have been featured in popular culture, and were a part of uniforms worldwide. They’re the original cowboy hat and take on several roles, making them valuable when exploring the West.