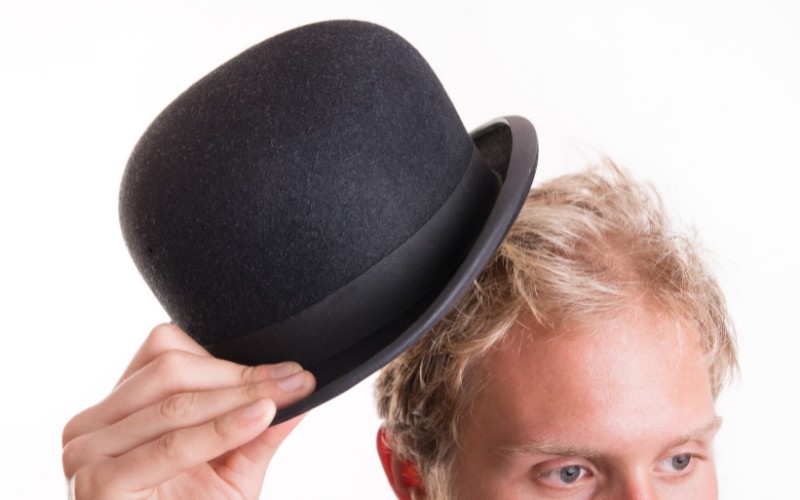 The 70s witnessed the sad and now nostalgic end of the bowler hat era. The iconic style was being left behind, and hat lovers suffered as they saw new trends emerge in its place. The real question we should be asking ourselves, however, is, in fact, not “why did people ever stop wearing bowlers?” Let’s focus on the bigger picture:

Why did people ever stop wearing hats?

The fizzling out of the bowler style hat was merely a sad consequence to the end of the hat era that defined much of men’s fashion in the 20th century.

For the majority of the 1900s, wearing a hat was not equivalent to making any sort of fashion or social statement. Much on the contrary, it indicated conformity to the social norms in place then; men were hardly seen leaving the house without a hat on. As the custom grew steadily throughout the early 1900s, arguably peaking in the 1950s, hats, much like shoes, were an indispensable part of a regular outfit.

The bowler may not have been the hottest style for all of those years, but it certainly was one of the most consistent. Much like the fedora, the bowler carried the fame of a seemingly timeless and staple style. Many different kinds of hats had their moment under the spotlight, but it can be reasonably argued that the bowler never quite left the stage.

That being said, bowlers clearly withstood the test of time better than other popular styles. Not only was the bowler a truly appreciated style amongst men, but it was also one of the last kinds of hats to be seen largely worn by men in England during the 1970s.

All over the world, theories float around regarding just why and how hats stopped being a part of the popular uniform. Though there is no way to be certain about how this shift truly came about, it is safe to say that the bowler held its status as a beloved accessory until the very end.

To account for its diverse fame, a historian deemed the bowler “the hat that won the West,” for its appreciation by cowboys, railroad workers, and the like. Wild West characters may not be the things that immediately come to mind when thinking of this arguably quintessentially British style – but it would make sense if it were.

When staring blankly at dates and events, it may seem like the bowler reached the end of its rope in the mid 1970s, though further inspection shows us that wasn’t exactly the case. Quite the contrary! If there is the possibility of a new cycle and strong return for an old and beloved hat style, the bowler is certainly in the running.