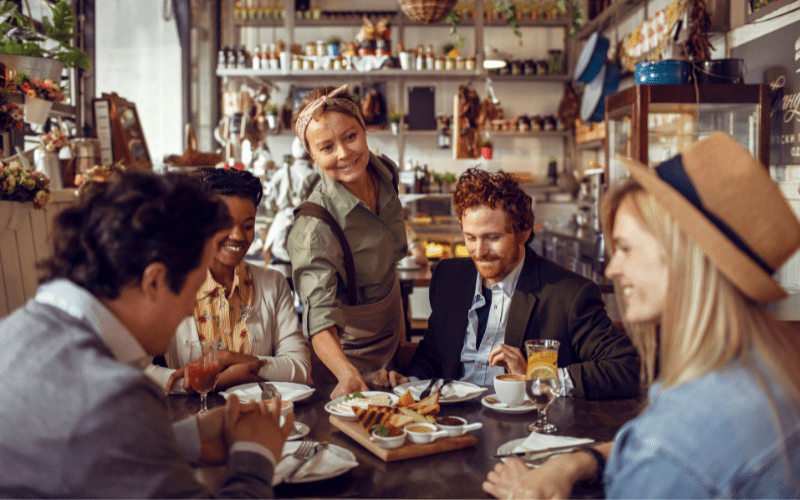 Objectively, etiquette has gone by the wayside in recent history. Unless you took cotillion classes as a young teen, you probably have limited formal education about etiquette.

This isn’t a Boomer lecture on how Millennials killed etiquette—far from it! We’re here to help you navigate some of the pitfalls of etiquette so you fit in anywhere.

One of the fancier places you might find yourself is an upscale restaurant, which may require you to be dressed from head to toe to the nines. If you don’t go to high-end restaurants often, and your outfit includes a hat, you may not know the proper hat etiquette in restaurants.

Here’s what you need to know about hat etiquette in restaurants.

Can you wear a hat inside a restaurant if you’re a man?

Men’s hats are still widely considered a functional piece of their wardrobe rather than a fashion statement. As a result, it’s appropriate etiquette for a man to remove his hat when entering a restaurant.

It is appropriate for men to keep their hats on in public spaces—like hallways and elevators—but once you’re past the threshold of the actual restaurant, be sure to remove your hat, especially if it’s a high-end establishment.

If you’re casually dining with a baseball cap or a beanie, following the rules of etiquette is much less critical. However, it’s essential to understand the rules to know when you’re breaking them.

Can you wear a hat inside a restaurant if you’re a woman?

If you’re a woman, your hat is considered a fashion accessory rather than a functional item. As a result, it’s appropriate etiquette to keep your hat on while in a restaurant.

That being said, if you’re dining at a special event and your hat could potentially block someone’s view of a keynote speaker or guest of honor, it’s appropriate to remove your hat. Rainhats are also an exception since they are considered functional rather than fashionable.

When should you remove your hat?

As a general rule of thumb, if you’re a man, you should remove your hat whenever you enter a private space, like a restaurant or home. Public spaces are free game unless someone is being honored—like while the National Anthem plays or at a funeral.

For women, it’s important to note that if you’re wearing a hat that’s considered unisex— like a baseball cap—the hat rules that apply to men also apply to you. Interestingly, in some instances, the hat determines the rules more than the person wearing the hat.

Where should you place your hat during your meal?

Depending on how upscale the restaurant is, there may be a hat check along with the coat check. If that service is available, you should certainly take advantage of it.

Some higher-end restaurants may also have hooks where you can hang your personal belongings—like coats, bags, and hats. It’s appropriate etiquette in that case to hang your hat.

If there’s not a good place to put your hat at the restaurant, you can either put it on the booth next to you or hang it from your knee while you’re dining. Make sure you put it in a spot that you’ll remember. You don’t want to have to call the restaurant the next day looking for your hat.