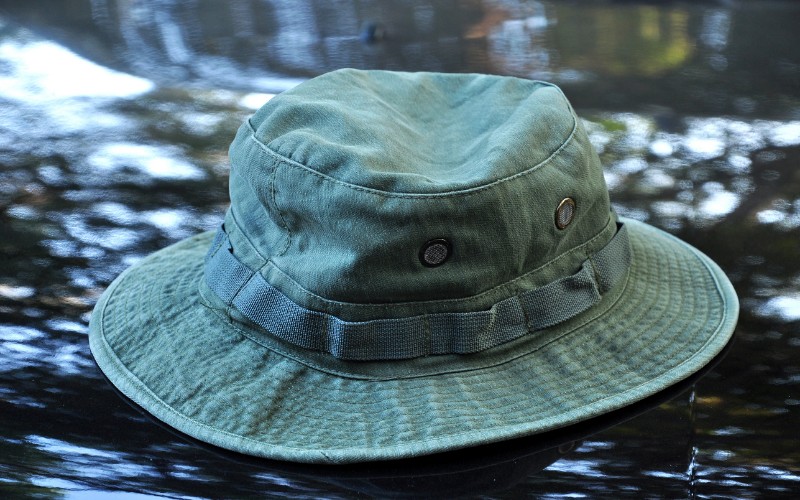 Although the boonie hat might not be considered the most attractive hat, it has a rich history of functionality that has made it perfect for military and outdoor use. If you’re not associated with the military, you may not necessarily recognize the name, but you’ve almost certainly seen this hat.

The boonie hat was initially made from recycled military materials, and then graduated to a cotton poplin or rip-stop fabric to make them more durable. They have wide brims, loops, and a draw-string to secure them safely to your head. Here’s a brief history behind the boonie hat.

What are the precursors to the boonie hat?

Before the boonie hat arrived on the scene, bucket hats were worn by fishermen, paving the way for this outdoor hat. Similarly, in the 1930s, “Daisy Mae” hats were issued amongst the US military, which although made from denim or twill, resemble the more modern boonie hat. Closely related to the boonie hat is the Australian “Giggle Hat,” which has a smaller brim. They were called “Giggle Hats,” because they weren’t the most fashionable looking hats.

Why was the boonie hat utilized during the Vietnam War?

The true emergence of the boonie hat happened during the Vietnam War. Boonie hats were useful during this time due to the hot and humid jungle environment, because they’re breathable and won’t trap heat, keeping the wearer as cool as possible. They’re also water resistant, which was particularly important due to the monsoon season.

The straps around the hat allowed wearers to secure twigs and other means of camouflage to the hat, while the shape and brim of the hat helped disguise the shape of the wearer’s head, which was very important for stealth. To keep the hat secure, a drawstring was added. Of all the hats that could have been issued during the Vietnam War, the boonie hat’s design was best for the climate and needs of the soldiers. The term “boonie” is short for boondock, which comes from the Tagalog word for “mountain.”

How can you benefit from owning a boonie hat if you’re not military?

Although initially designed for military survival, a boonie hat can serve you well in your everyday life if you enjoy the great outdoors. The boonie hat is great for fishing, gardening, watching outdoor sports, and any activity that involves exposure to warm weather elements.

It’ll help keep your head dry if you get caught in the rain and shield your face and neck from the sun. The boonie hat is actually preferable to a bucket hat for skin protection, because it provides more shade. You may not look like a fashionista, but you’ll be one of the only people in your group who won’t get sunburnt.

Once you understand the history of the boonie hat and its myriad uses, you’ll likely have a fuller idea of whether or not the hat is the right choice for you. Depending on how outdoorsy you are—and what you like to do outdoors—the boonie hat could be a great addition to your camping backpack. Even if the forecast is looking good, knowing that you’ve got your trusty boonie in your pack can give you the peace of mind you need to make the most of your outdoor hobbies.