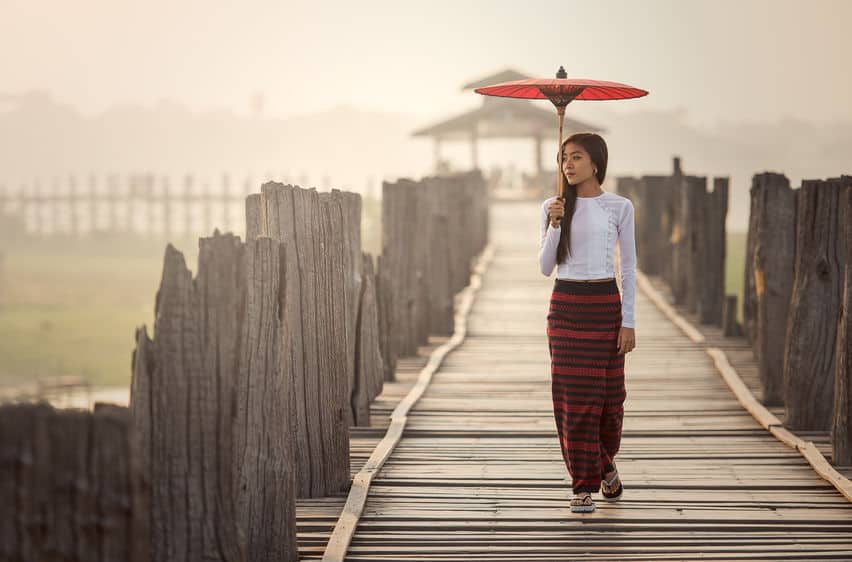 Nylon has served the umbrella well since its invention in the 1930s. Umbrellas were made from silk, cotton, and alpaca fleece before nylon.

To uncover what umbrellas were made from before nylon, let’s go over a brief history.

The use of umbrellas has been recorded throughout ancient history, in many different forms and in other regions of the world, the earliest of which can be traced back to Egypt circa 2450 BC.

These ancient Egyptian umbrellas were usually constructed from raw materials such as leaves and feathers—and were highly decorative, signifying class and status. Pharaohs would typically employ servants to hold these makeshift umbrellas above them like a canopy while they basked in luxury.

Egyptian umbrellas would have also protected from the sun’s intense UV rays.

Old umbrellas can be found in similar forms in places such as Greece, India, China, and the Middle East, from 2000 BC onwards.

Umbrellas would later fall out of popularity, throughout the dark ages and into the renaissance era and would not resurface again for some time.

The origins of the first umbrellas used specifically for rain coverage are obscure, but it is commonly believed that they likely began in Europe sometime during the 17th century.

Read more about the 4000 year history of umbrellas here.

Popularized in Chinese and Japanese fashion, oil-paper umbrellas are used for ceremonies such as parties and weddings. These are extremely beautiful and decorative and are usually accompanied by an entire wardrobe or costume, as in the case with the Geisha girl’s uniform.

Nylon fabric has an incredible ability to disallow water from penetrating it while also offering the advantage of being a very lightweight material. Silk, cotton, and alpaca fleece were earlier much less effective at keeping the user dry while also staying lightweight and compact. Umbrellas were not as compact as they are today and would take longer to dry. Nylon and to some degree, plastic have certainly been a game changer.