Skip to content
Home » Umbrellas » The Umbrella: How it Got Its Name 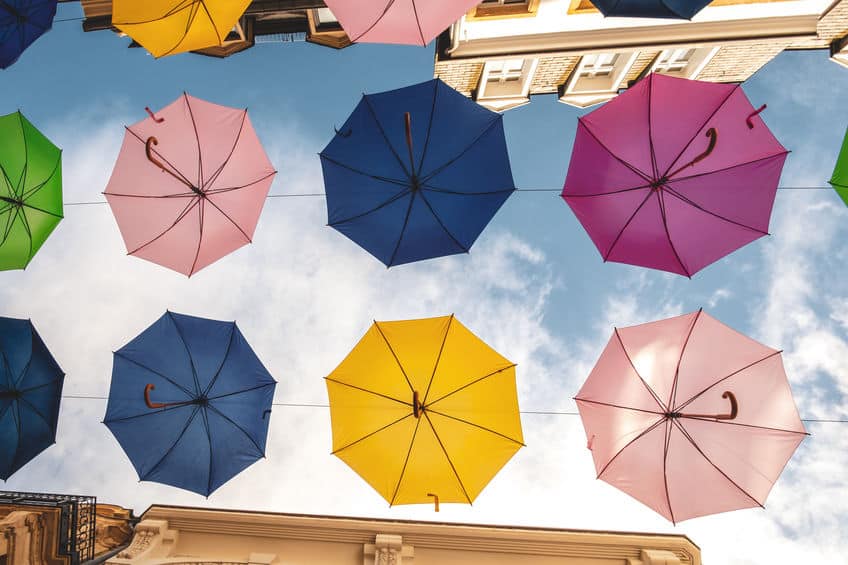 The word “umbrella” likely doesn’t mean what you think. The term doesn’t refer to rain but relates to the sun. So, how did the umbrella get its name if that’s the case?

The umbrella got its name from the Latin root “umbra,” which refers to shade or shadows. The first umbrellas from Ancient Egypt were made to block the sun, not rain. China made umbrellas waterproof in the 11th century BC, but these weren’t popularized across Europe until the 1500s.

Where Did the Word “Umbrella” Come From?

Like so many words in the English language, the term “umbrella” has Latin roots. The base word “umbra” refers to shadows or shade.

The first umbrellas weren’t intended to provide rain protection at all. Instead, they were designed to deliver shade and give some relief from the sun.

The first instances of umbrellas were parasols. While the terms are commonly used interchangeably, a parasol protects one from sunlight, whereas an umbrella shields one from rain.

A Brief History of the Umbrella

Before the accessory was even named, Ancient Egyptians depicted parasols – the basis of the modern umbrella – in hieroglyphic paintings. In the 11th century BC, Chinese people were the first to waterproof the parasol, making it what it is today.

Umbrella usage traces back to Ancient Rome and Greece throughout the first millennium BC. As the Roman Empire fell, umbrella usage did too, only being revived again in the late 1500s and early 1600s AD.

Read more about the very long history of umbrellas here.

Depictions of Parasols in Ancient Egypt

The first designs of the modern umbrella had one significant difference: they weren’t waterproof. While this may seem like a huge oversight, consider this: Egypt is in a desert. Rain protection was not a pressing issue. On the other hand, shelter from the sun was.

The preliminary and most basic umbrella-like models consisted of the palm tree leaf fastened to a stick. Later, they came to be made of cloth and animal hides. Due to the high price and inaccessibility of source materials, parasols were exclusive to royalty, priests, and people of nobility.

While the Egyptian desert doesn’t see much rain, the same can’t be said for China. As this Asian country has a much wetter climate, the need for rain protection is much higher. This led to Chinese people creating waterproof umbrellas made of silk, leather, or wax-coated paper.

The styles of these two variations remained incredibly similar, but the waterproof trait added a practical aspect like a modern umbrella. As in Egypt, umbrellas were expensive, so only upper-class people could access them.

Although umbrellas were gaining traction in China, a lack of established trade routes meant Europe had not yet adopted the new waterproof design. Instead, they maintained the use of parasols such as this modern-day vintage parasol on Amazon.

It wasn’t until the Renaissance era that umbrellas came back into the mainstream – but still only for the upper class. Read more about umbrellas and waterproofing here.

It was almost exclusively women using umbrellas at this time. That is until Jonas Hanway publicly carried the accessory in 18th century England. He decided on an umbrella that was more masculine in appearance: stronger and sturdier.

The man was painfully shamed for his trend-setting, but it caught on by the end of the century. Soon, the whole male population of England followed suit, and the umbrella became a gender-neutral accessory.

A further innovation came in the form of the hooked handle. This feature was added to the accessory so servants could hold umbrellas appropriately over their employer’s heads.

Beyond its functionality, umbrellas have a rich history and are infused with both religious and class significance. Next time you pop open an umbrella in a rainstorm, take a moment to appreciate Chinese innovation for a version of this accessory that keeps you dry.

Discover more intriguing facts about umbrellas in this article.