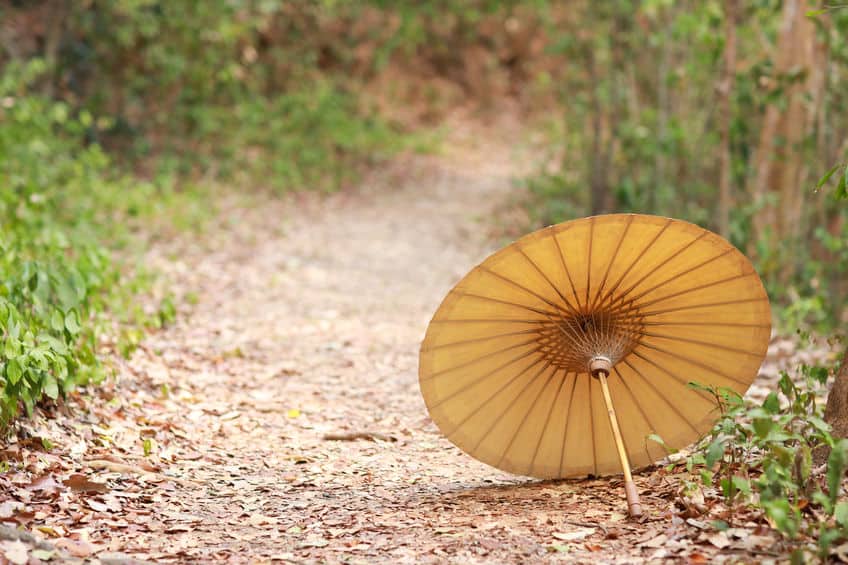 Umbrellas are regularly depicted in the artwork of past centuries as fashion accessories or functional tools. It seems like they have been around since the beginning of time.

Umbrellas are 4000 years old. The first basic umbrellas were created in Ancient Egypt, China, and Greece. However, it is impossible to know an exact date or place the umbrella originated. Over time, the structure of the umbrella has changed to make it what it is today.

Umbrellas are pretty universal. Not only are they used worldwide, but they were also developed around the same time in multiple places around the globe.

When and Where Was the First Umbrella Made?

The first umbrellas recorded in history differ from the functional accessory we know. Indeed, the basic design may even be unrecognizable to us an an umbrella.

There is no way for historians or anthropologists to pinpoint precisely when and where the umbrella originated. However, they did pop up (pun not intended) in many places around the same time – over 4000 years ago.

Ancient Egypt was one of the first birthplaces of umbrellas. Their design and purpose were quite different from the modern structure.

First of all, a bit of a back story. Inspiration for the umbrella is said to have come to Egyptians from two gods: Nut and Shu. In Egyptian mythology these gods created the sky. Shu is pictured holding Nut up as she begins an arch with her body. Together, they resembled the shape of an umbrella. Shu was the vertical shaft, and Nut was the fabric canopy.

These first instances of umbrellas were not umbrellas per se but rather parasols. While parasols resemble the umbrella significantly, their use is to protect from the sun, not rain. Read more about the difference between parasols and umbrellas in this article.

In Egyptian culture, the concept of the shadow was associated with restoration in the afterlife, and fair skin was a sign that the sun had not touched you. So, sun protection was of the utmost importance for religious reasons. Thus, the parasol was created.

At the time, only people of nobility and royalty could afford parasols because their materials – leaves and palm branches, then later cloth and animal hide – were pricey and hard to come by.

Around the same time, in China, umbrellas were also on the rise. A critical difference between Ancient China’s and Ancient Egypt’s umbrellas is that the Chinese did waterproof theirs.

To do so, the Chinese coated paper in oil or wax and attached this material to the bark of mulberry trees or bamboo to hold it up. Silk was also a standard fiber used to create the canopy. Like in Egypt, only Chinese dignitaries used umbrellas.

Some incredibly powerful individuals, like the Emperor of China, carried umbrellas with multiple layers to display their superiority and influence.

While China had already developed the waterproof umbrella, a lack of trade routes from Asia to Europe prevented them from being imported to Ancient Greece and Rome. Instead, women were still using parasols as an extravagant accessory.

During the challenging economic times as the Roman Empire fell, European parasols were almost entirely wiped out. Then, they were revived in the Renaissance era. With trade routes established to China, the waterproof umbrella made its way to the prestigious women of France, Italy, and England.

How Have Umbrellas Changed Over Time?

While most of the umbrella’s structure has stayed constant over time, it has had some notable upgrades over the past 4000 years.

One of the umbrella’s most prominent modifications occurred when it became waterproof. The canopy, or the fabric on the top that protects against the rain, has changed from natural fibers like cotton, paper, leather, or silk to a modern water repellent nylon. This upgrade took the umbrella from fashionable to functional. Read more about what umbrellas were made from here.

The umbrella could not always open and close. In the 20th century, Hans Haupt developed the first collapsible umbrella. Over 70 years later, Bradford E Phillips was granted a patent.

This adjustment made the umbrella more mobile, and thus, more accessible as well as convenient.

The umbrella’s hooked handle was added so the servants of upper-class members could hold it above them. The J-curve allowed these servants to grip the umbrella at a more suitable angle to cover their employers’ heads.

The good old classic umbrella is the design that most people are familiar with. These models open and collapse manually.

The overall design of automatic umbrellas is similar to classic ones but with one significant difference. Automatic umbrellas open at the press of a button, making them excellent options when your hands are full.

When you only have one hand free, automatic umbrellas come in handy, but not if it takes two hands to stop them from blowing away. Repel’s Double Vented Umbrellas on Amazon solved that problem by manufacturing a windproof structure. Wind can pass through the canopy, but rain can’t get to you.

Travel umbrellas are exactly like they sound: mini versions of standard umbrellas that are great when you’re on-the-go. These umbrellas are lightweight and collapse down to almost nothing, but still provides exceptional coverage once opened.

The EEZ-Y Windproof Travel Umbrella on Amazon fits perfectly in a backpack or purse, provides UV protection, and features a slip-proof handle. The durable build of these umbrellas are long-lasting, so you don’t have to compromise on quality for the sake of space.

The last thing anyone wants is to be the person walking down the sidewalk amidst a rainstorm with an umbrella that keeps flipping inside out.

There are few windproof umbrellas out there better than the Weatherman Collapsible Umbrella on Amazon. It stands strong in winds up to 55 miles per hour (89 kilometers per hour), and the product’s packaging is also made of 80% recycled fiber. Now you can do your part in protecting the earth while the umbrella protects you from its natural forces.

Over time, the umbrella has been updated so that users can have the best possible experience. These days, it’s still constantly improved upon. Whether you’re seeking an automatic, windproof, or lightweight model, your dream umbrella is somewhere out there.

Read more intriguing facts about umbrellas in this article.