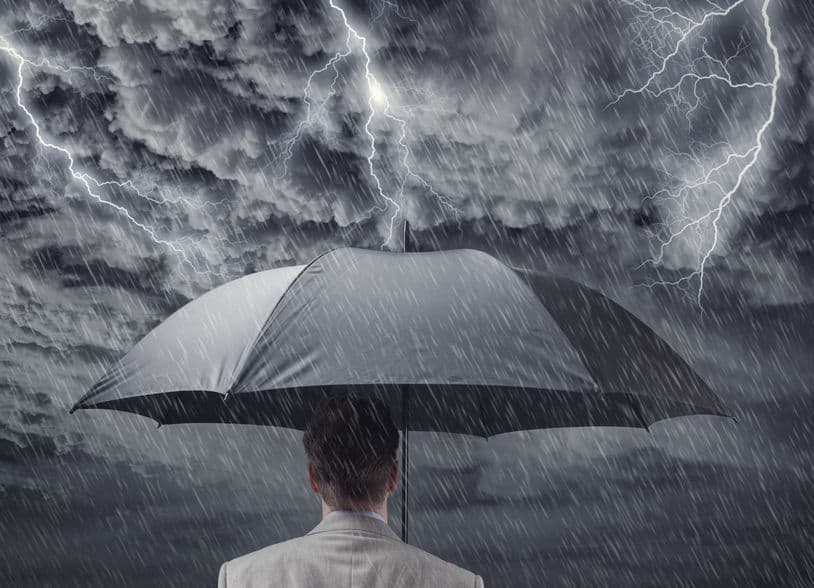 If you are anything like most people, you will probably agree that getting caught out in a thunderstorm is not fun.

Umbrellas are not safe from lightning. Lightning will find the shortest path to the ground, so umbrellas can make you a target due to increasing your height. Umbrellas constructed from metal are also good conductors of electricity. Avoid high places during lightning storms to lessen the chance of being struck.

Lightning is a naturally occurring phenomenon wherein electrically charged particles located within a storm cloud react in the atmosphere to create what is known as a “lightning bolt.”

A lightning bolt is a potent manifestation of electric energy, which can be visibly observed. Lightning is always accompanied by thunder.

The positive ground charge will travel through the tallest object in a given area to meet the cloud, as this is essentially the shortest distance between the two charges. This is why high places are hazardous during a lightning storm. This type of lightning strike is known as “cloud to ground.”

A commonly perpetuated myth about lightning strikes is that they are attracted to a person by items such as metal buttons, eyeglass frames, or earrings.

The truth is that although metal is a conductive material lightning will not target small metal objects in preference to taller structures. It is not uncommon to see trees that have been struck by lightning.

Static Electricity: A Sign of a Highly Charged Atmosphere

If you are outdoors and begin to notice this occurring, seek shelter indoors as soon as possible.

Each year, approximately 49 people are killed by lightning strikes in the United States alone. Many of these deaths could be easily preventable with precaution.

The main thing to keep in mind during a lightning storm is to avoid tall objects and high places at all costs. Many people instinctively seek shelter under tall trees during rainstorms. This is a bad idea as it dramatically increases your chance of being struck by lightning.

If you are caught in a lightning storm and have nowhere to retreat, the best thing to do is crouch down as low as possible.

It is generally safe to be inside a vehicle during a lightning storm as the rubber tires provide insulation from the ground.

So, next time you are caught in a thunderstorm and find yourself using an umbrella, think twice.