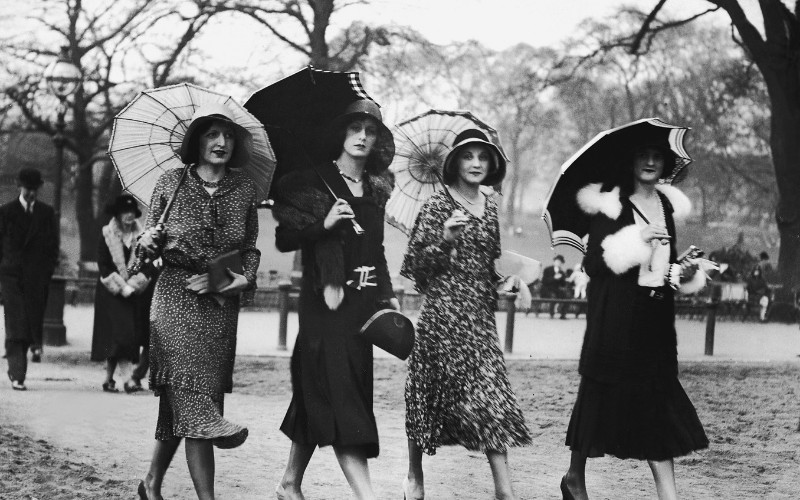 The 1930’s begun with the Great Depression from 1929-1933. This extremely influential time period gave the fashion and hats of the ’30s a unique twist. Men chose a more casual look and their hats followed. Women wanted form-fitting and the cloche hat was born. Although so many individuals faced hardships, gorgeous hats still prevailed and defined the era.

Here are 5 intriguing facts about the hats worn in 1930:

The smart looks of the 1920s translated into more casual clothing for the men, and more functional and masculine but still slightly feminine looks for the women. A clean, tight-fitting hat could be embellished with lace, feathers, and buttons for women. Men chose classics such as the boater, fedora, and bowler hat. Below the facts about 1930’s hats are expanded and explained.

Women in the 1930’s chose a more masculine look by having short hair. Men liked to look neat. Both styles chose a smaller, oftentimes more fitted hat to serve their fashion goals. Examples of fitted hats would be a beret or cloche hat for women and a fedora for a man.

2: For Women, hats covered the hair and were used to mysteriously cover one eye or the forehead.

Cloche hats or otherwise called slouch hats were a very fitted hat usually made of a felt material that were bell shaped. The front brim could be floppy or sturdy and was used to cover the forehead and eyes.

Hats were normally worn asymmetrically and slightly tilted or propped to one side of the head.

In 2007, the infamous cloche or slouch hat of the 1930s made a return for many fashion designers. Previously, the hat had returned to popularity also in the 1960s. It is almost inevitable that this type of hat will eventually be revived yet again into the fashion industry such as this popular wool cloche hat on Amazon.

4: The turban was a popular hat to wear.

This headwrap made of velvet, silk, or felt could be adorned with bows or fastened with a brooch. This look was described as “smart” in the 1930s. For women, the style was very well-fitted, more so masculine clothing choices and tying up the hair into a turban was popular.

While the women’s hat styles of the 1930s such as turbans have largely fallen out of fashion, the men’s hat styles of the 1930s are still popular today and can easily be purchased. Some of these hats include the fedora, homburg, bowler, cap, boater, and walker.  You’ll see men wearing these 1930’s hats much more often compared to a woman wearing a cloche for example.