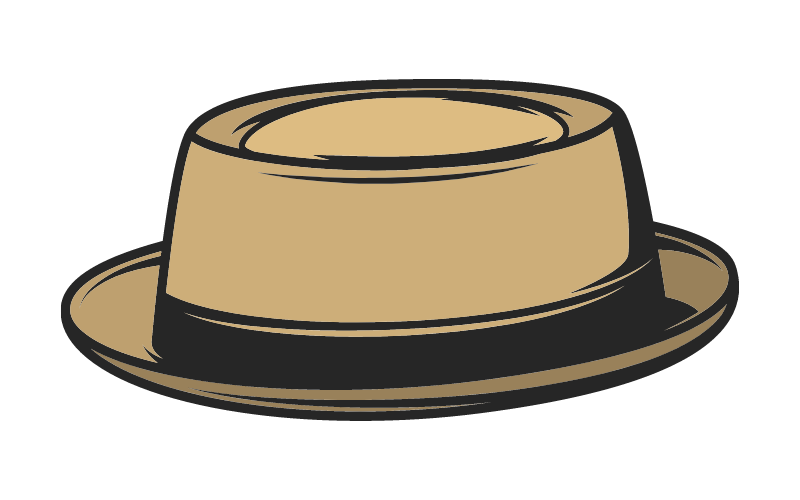 The crown of the hat is the top part of the hat above the brim. You will have noticed that they come in all different shapes and sizes and with different dents, creases and pinches. You may well be confused about how to identify the different types. This quick guide will cover some of the most common types of hat crowns that you are likely to come across.

Round crowns do not have dents and are dome shaped. The bowler hat is a typical example. This shape is also common with various sun hats such as the one below.

The telescope crown is characterised by a circular indentation around the crown of the hat. This feature is most apparent in the Pork Pie hat style. The name of this hat comes from the same telescope shape present in traditional pork pies. You can read more about Pork Pie hats here.

Tear drop crowns have indentations that form a tear drop shape in the crown of the hat. This shape is most common in fedora hat styles. The front of the hat crown is pinched to create this classic look.

Center dent hat crowns have an indentation running through the middle of the hat crown. The Homburg hat is a typical example of this crown shape. The Homburg hat worn by prominent people in history such as Winston Churchill was also popularised in the Godfather movies.

Just as the name implies these crowns are characterised by their flat tops. Boater hats and top hats are good examples of this crown type. The flat top to these traditional hats were especially popular in the 19th century. You can read more about the origin of design of boater hats here.

Diamond crown hats are characterised by the indentations in the crown forming a diamond shape with distinct edges. This shape is most common in fedora style hats. ‘Gangster’ style fedora hats often have this shape.

The cattleman crown is characterized by a central crease with two smaller creases along each side. It is one of the most traditional crown styles found on cowboy hats. Several hats in the Stetson range have a cattleman crown such as the Open Road hat (Amazon).