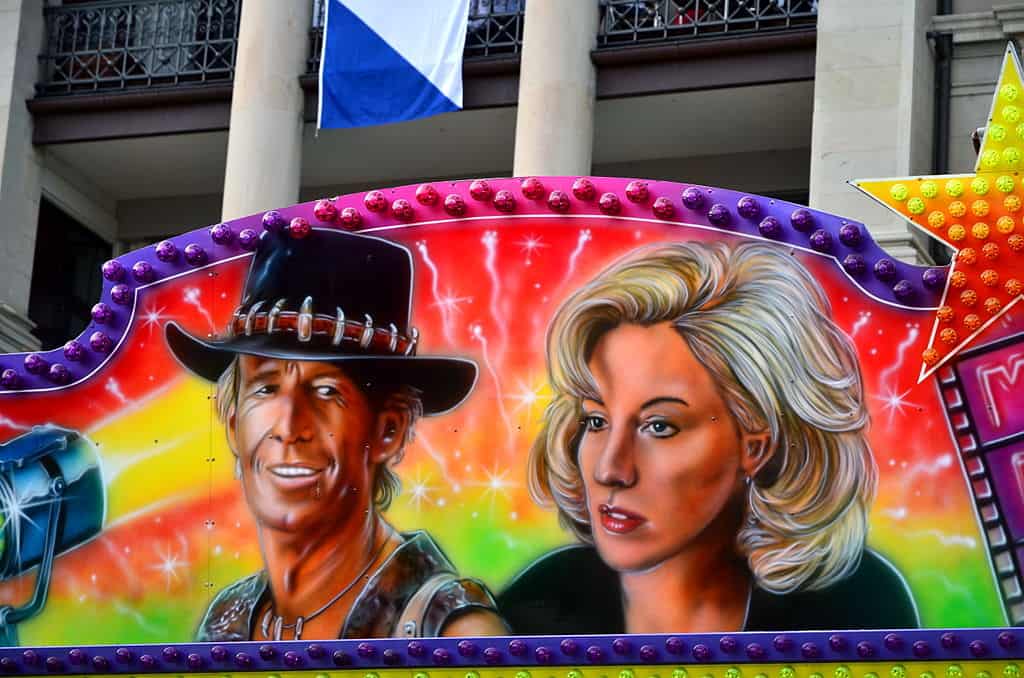 It is widespread for films and television series to promote a particular type of dress or a specific article of clothing. In Crocodile Dundee’s case, his hat skyrocketed in popularity and garnered most of the attention.

The movie set in the Australian outback became a huge hit in 1986. In 2018 David Droga, an influential Australian advertising executive, said, “There has been no better ad for Australia than that movie”.

What Type of Hat Did Dundee wear?

Dundee wore a black down under outback hat called the ‘The Croc”. It has a crocodile leather band with crocodile teeth attached.

The hat was made by the Australian hat company Akubra. Founded in 1874, the popularity of the Dundee hat helped the company gain traction in hat sales, especially in rural communities. All their hats are made in Australia.

Outback hats resemble the classic western style, with an added chin strap. Often mistaken for cowboy hats, they offer intense protection against the elements as you engage in outdoor physical activity.

Within the outback hat family, styles differ in details, like how curved they are at the brim and their materials.

Where To Get a Crocodile Dundee Style Hat

Akubra still makes a Dundee-style hat called The Croc. It features a genuine crocodile leather band and genuine croc teeth. It retails at 270 AUD. If you are in Australia, you can purchase it; unfortunately, they cannot export the hat outside of Australia due to wildlife permit regulations.

The Oztrala brand, however, also makes hats in the image of the original Dundee hat using rawhide leather in the Australian outback style. Their hats are also made in Australia but are available in the US.

They include genuine crocodile leather hat bands with the signature crocodile teeth attached.

The import of crocodile leather to the US requires an import license, so the hat bands were not available for some time. Oztrala has put the appropriate wildlife permits in place, making the hat available.

You can check out the hat on Amazon here.

The Down Under and Snowy River Hats Are Very Similar

The Akubra Snowy River hat is very similar to the Down Under hat. The Snowy River hat was released in 1982, four years before the Crocodile Dundee Hat. The hat was inspired by the movie ‘The Man From Snowy River.’

So, if you are looking for a hat similar in style but built more subtlety, this could be the perfect option. You can find it on Amazon here.

The 1986 film Crocodile Dundee sparked a rapid increase in the popularity of the hat worn by the main character, Mick Dundee. This popularity prompted many different hat-making companies to develop their version of the hat, which remains popular today.

Read more about popular hats in movies in this article.