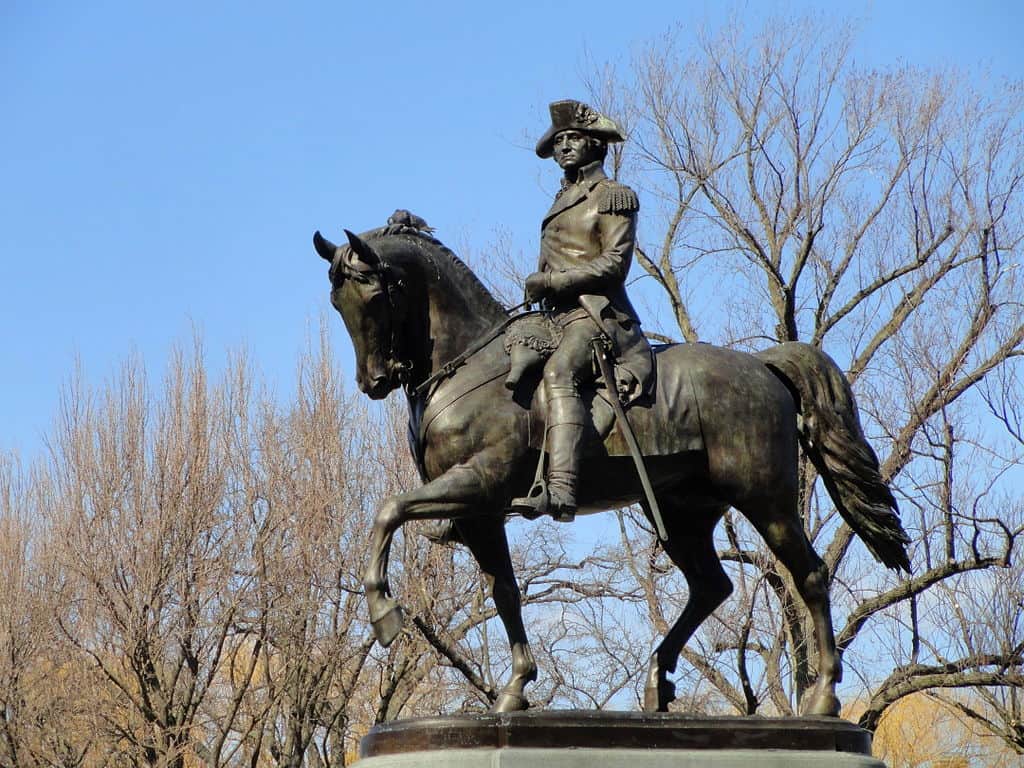 Across the ages, people have worn some form of headgear to protect their heads from the elements. By the 15th century, men’s hats, in particular, became increasingly popular as essential fashion accessories.

Sporting different styles, colors, and materials, hats soon became an integral part of dressing for both men and women.

The type of hat George Washington wore was called the tricorne or tricorn, a triangular-shaped hat that evolved from pledging the brims of the broad-brimmed round hat favored by 17th-century Spanish soldiers. Popular in the 18th century, the hat fell out of style by 1800.

If you are curious to learn more about the hat worn by George Washington and the rich colonial history surrounding this iconic hat, keep reading.

What Is a Tricorne?

The tri-corner hat is famously referred to as the cocked hat or three-cornered hat with close links to the American Revolutionary War.

The black felt hat rose to prominence in 17th-century America after the traditional tall-crowned hats with wide brims like the Puritans’ steeple hats went out of style. The hat also featured a much lower crown.

To wear the tricorne, you need to turn three sides of the hat’s brim upwards, pin them into place, and create a triangle around the head.

Since the folded brim made the tricorne smaller, it was pretty easy to tuck the hat under your arm upon entering a building. This gesture showed proper social etiquette at the time, and it was common practice not to wear a hat indoors.

Unlike steeple hats, the tricorne did not mar your appearance or look precarious when worn on top of a wig, which was men’s newest fashion trend then.

Instead, the unique style allowed you to show off your latest wig fashion and, consequently, your social status. Furthermore, the turned-up portions helped shade your face from the sun’s harsh rays.

The tricorne hat’s origins date back to 17th-century Spanish soldiers in Flanders who wore the hat to allow better clearance for their rifle ends whenever they held them upright.

Typically made from animal fiber (beaver) or felt, the tricorne sported different styles ranging from simple hats to extravagantly styled hats adorned with feathers and trim.

Most hat wearers either left the brim plain or dressed it with various trims such as black or white worsted wool hat braid. Others used metallic tapes, brocades, and different colored silk trims.

It was also not unusual to find tricornes trimmed with gold or silver lace. The hat’s main body was usually black, grey, or tan, though black was the most popular color.

Milliners used fur felt to make high-quality tricornes, while the more affordable types often came in wool felt. Most men also preferred tricornes made with beaver felt material, but wool and camel’s down were also available.

You can get costume tricorne hats on Amazon here.

A Popular Type of Hat

The tricorne was hugely popular in the 17th and 18th centuries and was not only worn by the aristocracy but was part of the everyday civilian dress, the military, and naval uniform.

Apart from George Washington, four other 18th-century American presidents wore the tricorne. Many believe that James Monroe got the nickname “The Last Cocked Hat” due to wearing this hat.

Worn fashionably with the point facing forward, the tricorne was also popular with sea captains, dashing pirates, and highwaymen.

Soldiers preferred wearing the tricorn with the front corner perched above their left eyebrow, which allowed them to have a clearer view since they often rested their muskets on their left shoulder.

In addition, the hat’s brim formed gutters that helped tilt rain away from the face and onto the shoulders. The most common military tricorn had a 5-inch (12.7cm) brim at the back and 4 inches (10.16cm) at the front.

On 20th August 1776, George Washington, as the supreme commander, ordered that cockades be attached to headgear and worn as part of military uniform.

As a result, these knots of ribbon became a means of identification amongst military personnel, with colored cockades representing different ranks. Apart from serving as office badges, the cockades made the hats look more appealing.

Once the tricorne hat fell out of civilian use, the top hat took over as the next fashionable hat. However, amongst military officers, the tricorne hat evolved into a new style, the bicorne, which survived until World War 2 and was a favorite of Napoleon Bonaparte, the French military leader and emperor during the French Revolution.

Read about other famous people to wear tricorne hats in this article.

The tricorne hat is a significant historical fashion statement. It is permanently etched in history and is favored by historical figures like George Washington.

While it fell off the fashion aisles after 1800, it remains a classic reminder of the character and pride of the American Revolutionary Army and its great leader, George Washington.