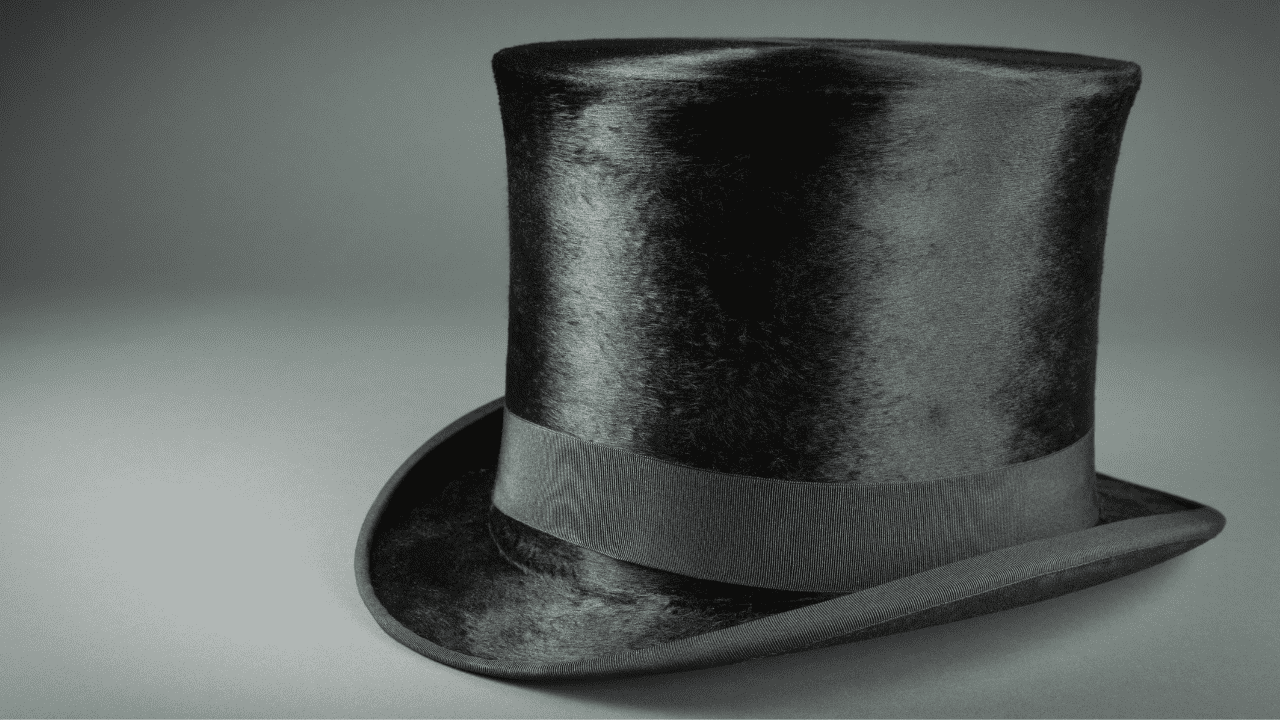 The top hat is a tall, flat, crowned cylindrical formal hat popular in the 19th century.

The top hat has been an American fashion staple since the 18th century. But how has this accessory made a name for itself in the last 300 years?

The top hat dates back to 1793 in England, crafted by a hatter named George Dunnage. The 8″ tall hat later became popular in America, thanks to Abraham Lincoln, who credited this hat with saving his life during an assassination attempt. It later became a fixture at presidential inaugurations.

Let’s review seven intriguing facts and details about the hat’s history that you might not know.

Get your quality top hat on Amazon from Belfry hats.

The History of the Top Hat

The top hat was introduced in 1793 in England by a hatter named George Dunnage. During its first 30 years, this fashion trend became popular in all social classes.

The original top hat was made of felt and sat at 8″ (20.32 cm) tall (on average). Today, the top hat is significantly less popular as a daily dressing than centuries ago.

Discover more about why top hats were so popular here.

Historians suggest that a top hat saved America’s 16th President, Abraham Lincoln, from an assassination attempt earlier in his career. The tale ended with Lincoln removing his hat to reveal a shock: a bullet that traveled straight through his top hat.

The top hat became Lincoln’s go-to headwear, responsible for the hat’s surging popularity during his time in office.

The Top Hat Has Become Shorter Over the Years

Initially, top hats stood at an average of eight inches (20.32 cm) tall. However, as with all fashion trends, the top hat has since evolved and is now shorter than ever.

Many Top Hats Were Collapsible

Antoine Gibus invented the collapsible top hat or gibus in 1840. This model held a spring-loaded top piece that could be folded up for storage and popped open for wearing. The gibus later became known as the opera hat, as it was easy to remove and tuck away while attending a show.

A Rabbit First Emerged From a Top Hat in 1814

The classic magic trick — pulling a white rabbit out of a top hat — dates back to 1814, when French magician Louis Comte performed the trick in front of an audience. His other gag asked to borrow a top hat from a bald audience member before wowing his fans with a white rabbit. Comte’s first-ever top hat trick involved pulling his young son from the hat!

Uncle Sam Was Well Known for Wearing a Top Hat

The bald eagle, stars and stripes, and flag colors in the United States represent traditional American culture. Uncle Sam, a famous top hat wearer, joined these ranks during the War of 1812. Uncle Sam completed his iconic look with a white top hat decorated with stars and blue, symbolizing patriotism and American propaganda.

Top hats were once a presidential inauguration tradition, with John F. Kennedy donning this hat at his inauguration, but he didn’t actually wear it for his address. However, the former president was a stickler for formal attire in most settings.

The top hat has been a significant part of fashion culture worldwide over the last 300 years. Uncle Sam, Abraham Lincoln, and even John F. Kennedy come to mind in the United States when imagining popular top hat wearers. Since its inception in 1793, the once 8″ (20.32 cm) top hat has shrunk down to a mere 5″ (12.7 cm) but still maintains a lofty height in people’s imagination.